Sales of the fifth generation of the Outback started in 2015.  This is based on the simultaneously renewed sixth generation Legacy ,by early 2018, the outback received a facelift. The diesel engine has not been offered since then.

According to Subaru, the reworked styling must, "combine the strengths of passenger cars and sport utility vehicles and capitalize on the notoriety gained through the sale of the Outback since 1995."

Technically, the Outback grows slightly in length (but remains broadly unchanged in width and height) and is based on a frame stiffened compared to the previous generation and which adopts a new torque vectoring system for greater agility. The A-pillars on each side of the windshield have been brought forward to increase the space on board, the Outback remaining one of the most spacious vehicles in its segment while work on aerodynamics has reduced resistance to vehicle air compared to previous generations. The trunk volume reaches a minimum of 502 liters, 560 liters including the compartments under the floor alongside the puncture-proof kit. With the seat backs folded down, the loading capacity reaches 1,848 liters, one of the best volumes in the category . 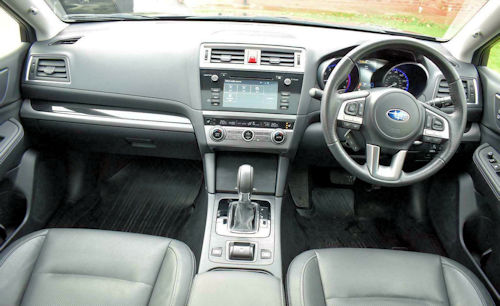 Inside, the dashboard is modernized and accommodates a large 7 "touch screen coupled to the Subaru StarLink system which allows you to duplicate the screen of your smartphone . A small screen displaying essential information is also placed between the two meters analog instrument panel.

The EyeSight anti-collision system appears for the first time on the European market, whereas it has been available in Japan and the United States since 2008. It consists of two cameras positioned above the windshield, coupled to a 3D processor capable of detect pedestrians and cyclists as well as their speed and movements and read road markings. In case of danger, the system sends an audible warning and to the dashboard and, if there is no reaction from the driver, the system can brake automatically to reduce damage in the event of a collision. The IIHS Institute ( Insurance Institute for Highway Safety) American studied the collision avoidance systems of 74 vehicles, and only the Legacy and the Outback received the highest marks.

The fifth generation of the Outback is still available with the Lineartronic automatic transmission. Operating like a continuously variable gearbox with common gaits, it imitates the operation of a conventional automatic gearbox in the event of large reminders. The gearbox also has a manual mode allowing you to choose between 7 virtual ratios controlled by paddles behind the steering wheel, the lever not having "+/-" positions. A six-speed manual transmission remains available for diesel engines.

Like its predecessors, the fifth-generation Outback remains at ease off-road. The X-Mode of the gearbox which manages the optimization of the engine, braking, speed, etc. can move on difficult terrain. Finally, the towable load is 1,800  kg for diesel, and 2 tonnes for gasoline.The two engines available are a 2.5-liter four-cylinder petrol engine with 129 kW / 175 hp and also the 2.0-l four-cylinder boxer diesel with 110 kW / 150 hp. As was the case with the fourth Outback generation, the gasoline engine is only available in combination with the continuously variable automatic transmission "Lineartronic", while the diesel engine is optionally available with a 6-speed transmission.

The 2.5-liter four-cylinder petrol engine experienced several problems related to excessive oil consumption during the model's early years on the market. However, the problem will be fully taken over by Subaru and will be resolved subsequently .

Problems related to the battery will also be reported, preventing the operation of electrical accessories.