The Subaru Exiga (pronounced x-shiga) is a new medium MPV that debuted as a concept car during the 2007 Tokyo Motor Show. According to the Japanese Subaru press introduction materials, the name "Exiga" is a neologism combination of the words "exciting" and "active".

The vehicle boasts a supersize panoramic glass roof and theater-style seating, with rear passengers sitting a little higher than those in front. Seats in the concept vehicle were upholstered in leather and trimmed in pearl white and blue. The rear seatbacks incorporate fold-down tray tables, similar to those on airplanes.

The instrument panel in the concept vehicle offered displays from eight monitors, providing excellent visibility around the vehicle, and also housed a clear blue multi-display zone. There continues to be indirect lighting in the side doors and ceiling in the production vehicle, providing soft ambient light at night.

The engine is a 1994 cc turbocharged H4 based on the Subaru Impreza WRX coupled to Subaru's 5EAT automatic transmission used in the Subaru Legacy and Subaru Tribeca.

According to an article from Autoblog, Subaru introduced the seven seat wagon in the Japanese market June 18, 2008.

Subaru does not sell the Exiga in North America, opting to sell the similarly-sized Subaru Tribeca 7-seater instead. However, both the Exiga and Tribeca are sold in Australia and Singapore.

In Singapore, the Exiga is sold in 2.0i and 2.0GT trim levels. The same models are also offered in Indonesia, where the market of 7-seater MPV is very big. 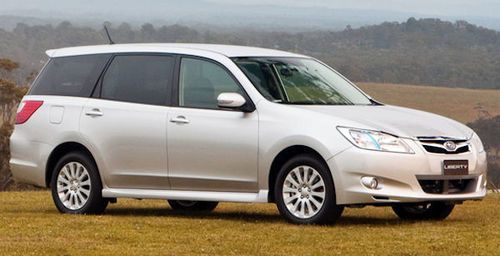 The Exiga was released for sale in Japan on June 17, 2008, and was built to replace the Subaru Traviq, which could also hold 7 passengers in the Japanese market. It was initially sold only in Japan but Australia is the first export market outside of Japan to receive it, where it is badged Subaru Liberty Exiga.Due to the exterior dimensions of the Exiga not being in compliance with Japanese Government regulations, it is not classified as a "compact MPV".

The Exiga is available in four trim options: the 2.0i is the entry level version, followed by the 2.0i-L, the 2.0i-S, all with a non-turbocharged engine, and the turbocharged 2.0GT with intercooler. The front grille and hoodscoop denotes if the engine is turbocharged; the chrome plated version is attached to vehicles without a turbo, and a metal mesh with dark plating is for the turbo. Two catalytic converters have been installed in a tandem configuration for effective emissions control. Active Torque Split transmission is used on engines without a turbo, and VTD is used with the turbo. Wheel sizes are either 16" or 17" for the turbo. For the Japanese-spec Exiga, AWD is optional on the naturally aspirated version and standard on the turbo as of July 5, 2008.

On September 2, 2009, the Lineartronic CVT transmission was available on AWD vehicles, and a driver safety aid called "EyeSight" was added as an option on the top level 2.0GT.

EyeSight consists of twin cameras, one on each side of the rear view mirror, that use human-like stereoscopic vision to judge distances and generally keep tabs on the driver. The system can help maintain a safe distance on the highway, a lane departure warning system, a driver alert warning for various safety situations, and even keeps an eye out for pedestrians. SI-Cruise has also been integrated into the EyeSight feature.

The Exiga can seat seven passengers, utilizing a gradual elevation of the seats, placing the first and second rows slightly lower than the third row. An optional, fixed position, panoramic glass roof covers the first and second rows of seats. Large rear door openings open to almost 90 degrees for easy access to the third row. The rear suspension uses double-wishbone architecture to make room for the third row and a wide luggage compartment when the second and third row seats are folded down. The second row seats can be individually slid back and forth 180 mm (7.1 in) as needed, with a one touch folding mechanism to allow access to the third row. The cargo area offers a covered stacking approach, allowing items to be placed under the floor. Two airbags are used for front passengers, supplemented with first row side impact and additional side curtain airbags protect first and second row passengers. The seats utilize anti-whiplash, impact-absorbing technology. A collapsible brake pedal is included to reduce the chance of foot injury in a severe collision. There are no air conditioning outlets for the second and third rows but the front outlet is designed to channel the air further along the ceiling of the vehicle.

With the good reputation of Subaru Liberty in the Australian market, the Exiga was released in Australia in November 2009. Marketed as Subaru Liberty Exiga, it's powered by 2.5 liter normally aspirated EJ25 engine and available as the base 2.5i and upmarket 2.5i Premium trim levels. 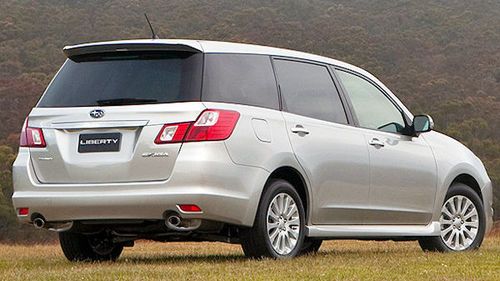