The Rex (K21), introduced 15 July 1972,was the replacement for the Subaru R-2, which was itself the replacement for the long lived, but outdated Subaru 360. Because the R-2 was based largely on the 360, originally including its air-cooled two-stroke engine, it lasted for not even three years. In contrast, the 360 was produced for 11 years and the rear-engined Rex was produced for nine.

The Subaru Rex represented a fresh start designwise, sharing little of its appearance with the Subaru 360, although they were mechanically the same and shared a rear-engine layout.The Rex also retained the 360/R-2's rear swing axle. The appearance of the new Rex was similar to the new larger platform, the Subaru Leone. The Rex originally featured the same water-cooled 356 cc EK34 two-stroke engine as used in the R-2, and was available only as a two-door sedan. In February 1973 a four-door sedan was added, and a three-door "Van" was added in February 1974. The Van was registerable as a commercial vehicle, allowing for considerable savings in taxes and fees. The EK34 engine came with a 32 PS (24 kW) single carburetor on the Custom L, Super L, and other trim levels down to Standard, or a 37 PS (27 kW) double carburetor for the sporty GSR. The TS (Touring Sport) received a 35 PS (26 kW) iteration. The GSR was also somewhat lower than its counterparts, due to radial tires being fitted.

In October 1973 the two-stroke was replaced by a 358 cc rear-mounted, watercooled, two-cylinder, four-stroke engine called the EK21. This produced 31 PS (23 kW) at a peaky 8,000 rpm and 3.0 kg·m (29 N·m; 22 lb·ft) of torque at 6,500 rpm, and featured Subaru Exhaust Emissions Control (SEEC). The car also received a minor facelift (with a "frowny" rather than the smiling grille seen on the turqoise four-door in the infobox being the most obvious difference) and a new chassis code: K22. Front disc brakes were also introduced as an option at the same time. The four-stroke Rex could reach a top speed of 110 km/h (68 mph). The three-door, two-seater "Van" (K42) arrived in February of the next year, when a five-speed version (Custom5) was also added. In September (1974), along with a minor facelift consisting of a new grille and bumpers adjusted to allow for the fitment of larger license plates, a "Wagon" version (K26) appeared. This received four permanent seats, but was no longer registerable as a commercial vehicle and had a considerably lower max load. At the same time, a "Super L" version of the Van was added. Vans and Wagons received a lower tuned engine, with 28 PS (21 kW) at 7,500 rpm; but torque increased somewhat to 3.1 kg·m (30 N·m; 22 lb·ft) at 5,700 rpm. This became the power output of the standard Rex as well for model year 1976 after the SEEC-T (Subaru Exhaust Emission Control - Thermal and Thermodynamic) emissions control system was introduced in December 1975. Torque was down to 2.9 kg·m (28 N·m; 21 lb·ft) at 6,000 rpm.The equipment levels were also reshuffled, with the B-type replacing the Standard and then rising from the AI via the AIG and AII to the AIIG on top. The AII and AIIG versions received disc brakes in front, but the five-speed was no longer available. 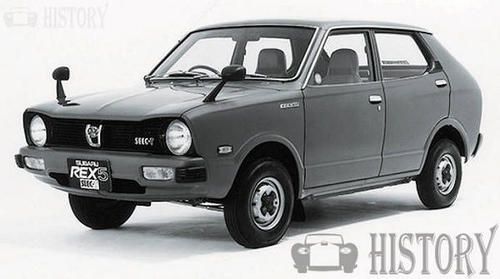 In April 1975, the Van received a higher roof and became a four-seater. This was necessitated by Japanese commercial vehicle regulation which require the floor to be completely flat when the rear seat is folded. Because the Rex's engine was mounted in the rear, the cargo floor was rather high, meaning that more head room would be required before a seat could be installed. The Wagon continued in production until the SEEC-T version was introduced in December, but it lost most of its market with the availability of a four-seater Van. 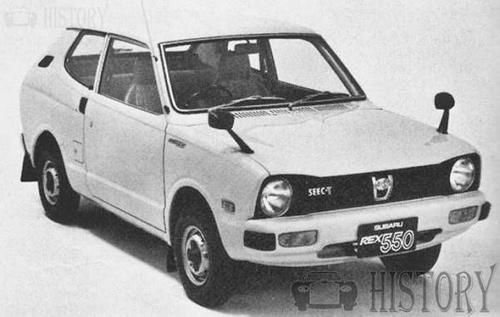 In response to new regulations for Kei cars introduced for 1976, Subaru introduced the larger-engined Rex 5 in May of that year. It retained the earlier bodywork (albeit broadened by 10 cm and with a lengthened bonnet for an overall length of 3,185 mm or 125.4 in) but got a 490 cc version of the same engine. The Rex 5 (K23, K43 in the Van version) engine was still of two cylinders and an overhead cam design, and retained the SEEC-T emissions control system. Power increased from the emissions choked late 360s to 31 PS (23 kW) at 6,500 rpm, while torque increased to 3.8 kg·m (37 N·m; 27 lb·ft) at 4,500 rpm. The AIG version was dropped. The Van version received a 28 PS (21 kW) engine (at 6,000 rpm) with the same torque, albeit at 500 rpm lower. Van equipment levels were Standard and Super Deluxe. This version (called the Subaru 500 in the export) was short-lived, replaced by the bigger Rex 550 exactly one year after being introduced.

In March 1978 the Swingback version was added, a two-door sedan which received a larger, opening rear window. The large rear window necessitated a slightly smaller opening to the engine compartment, but this was more than made up for by allowing for access to the rear luggage compartment from the outside. In March 1979, the Rex underwent a very minor facelift, the most visible results being new rims and slightly differing bumpers and a small spoiler in front.Then, in response to the very low priced Suzuki Alto, a decontented version of the Van called "Family Rex" was added in October 1979. It was priced at a very low ¥480,000 (under US$2,000 at the time). An automatic clutch version was added in March 1980. 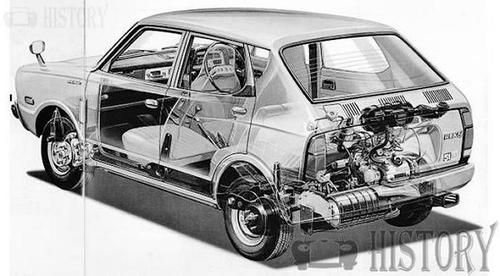