The Subaru 360 was the first automobile mass-produced by Fuji Heavy Industries' Subaru division. A number of innovative features were used to design a very small and inexpensive car to address government plans to produce a small "people's car" with an engine no larger than 360 cc when most in Japan could not afford a car. The body size and the engine capacity were designed to match within Japan's kei car regulation. Nicknamed the "ladybug" in Japan, it was one of Japan's most popular cars, and among the smallest cars in the world to attract a significant following. It was a significant step up from microcars such as the Iso Rivolta Isetta as the first kei car that had four wheels and room for 4 passengers. 392,000 units were produced in Japan from March 3, 1958 to 1971. Production ended for the 360 and was replaced by the Subaru R-2. 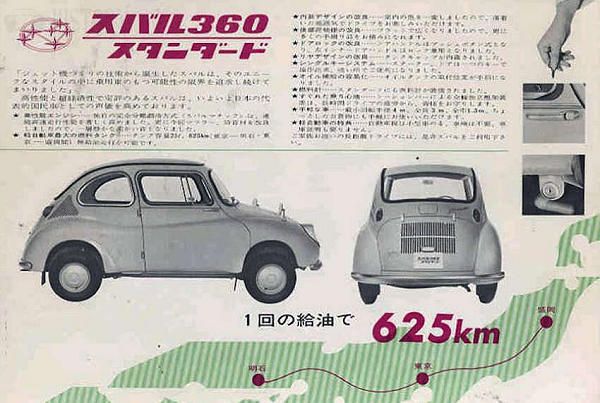 The 360 was named for the size of its very small air-cooled, 2-stroke inline 2-cylinder 356 cc engine mounted transversely at the rear. By contrast, most conventional automobiles at the time used water-cooled four-stroke engines with 4 or more cylinders mounted in the front. Two-stroke engines are lighter, simpler, easier to cold start, and produce more power for less weight because they produce power every two piston strokes, rather than every four. As with the two-stroke Saab 93s and other small two-stroke gas engines, oil was needed to be pre-mixed with gas, with the fuel tank lid serving as a measuring cup. In 1964, the "Subarumatic" lubrication system did this mixing from an under-hood reservoir.

While this was one of the more notable cars which adopted an arrangement similar to the Volkswagen Beetle, the car is much smaller, less powerful, and was not nearly as well accepted in the world marketplace. The body was of monocoque construction, where the body serves as the frame, and used a lightweight fiberglass roof panel. Since the post war period, more automobiles would switch until unibody construction is now the norm for passenger cars and even many light trucks. Many of the ideas came from engineers from the former Nakajima Aircraft Company, which became Fuji Heavy Industries. The "suicide doors" are hinged at the rear, which Consumer Reports remarked could and did result in a partially locked door falling back in the wind in their testing.

Equipped with a 3-speed manual transmission, it had a top speed of 60 miles per hour. It weighed under 1000 pounds, which exempted it from normal US safety rules. Fuel economy claims were as high as 66 mpg, but in Consumer Reports tests, acceleration was modest, with a 0-60 time of about 37 seconds, and they reported to expect 25–35 miles per gallon. When introduced in 1958, the 360's engine turned out 16 hp (12 kW). By the end of production, power had increased to 25 hp (19 kW) with a 36 hp (27 kW) twin-carbureted engine as an option.

Several variants were produced, including a station wagon (called the Custom), a convertible, and two sport models known as the Young S, which had a slightly upgraded engine and transmission (4 gears instead of 3), bucket seats and a tachometer along with a black, white striped roof with a dent along the middle to put one's surfboard. The Young SS, which had the EK32, dual Mikuni Solex carburetors and chrome bores, produced 36 hp (27 kW). From 1961 onwards, a flat-nosed truck and van called the Sambar were also produced using the 360's engine, with arrangements similar to the Volkswagen Transporter in a smaller size. Many small businesses became very successful thanks to the pickup's small size for tight streets, quickness, ease to drive and great fuel economy. In the United States, the engine's displacement was increased to 423 cc using the Subaru EK51 series engine between 1960 and 1966. It was known as the Subaru 450, and was also given the name Subaru MAIA. The Maia variant was the sole sedan model imported into Australia (approx. 35) in 1961 - along with approx. 38 Sambar vans and trucks. 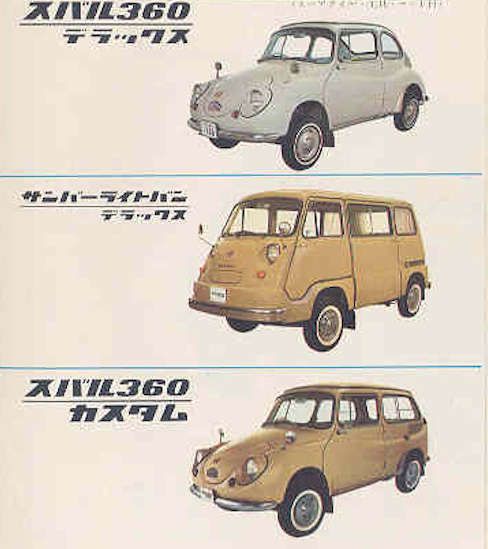 A used car dealer in Ballarat, Victoria (Frank O'Brien) brought approximately 73 Subaru 360 vehicles into Australia in 1961. This was a mix of Maia sedans and Sambar vans and trucks. Unfortunately they suffered from overheating problems and although a solution was eventually found, it came too late, as the associated losses were too great for the dealership to cope with and further importations ceased.

Approximately 10,000 were exported to the US, with an original price of $1,297. The 360 was exported to the United States by Malcolm Bricklin before he later manufactured his own cars. The Subaru 360 received notoriety in 1969, when Consumer Reports magazine branded the automobile "Not Acceptable" because of safety concerns and lack of power. Because the car weighed under 1000 pounds, it was exempt from normal safety standards, but it was reported that it fared badly in a test crash against a large American car with the bumper ending up in the passenger compartment of the Subaru.

Sales soon collapsed, as there were various rumors of Subaru 360s being tossed overboard or being shredded to pieces. It was also reported that many 360s sat on dealers' lots for two or three years without ever being purchased. Despite this, Subaru gained popularity in the United States with its later models, and remains profitable there today. 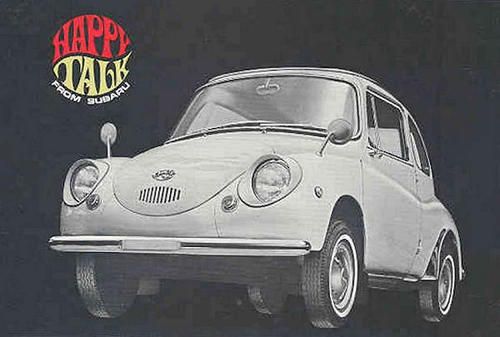 The Subaru 360 was replaced by the less popular but more advanced R-2 which was quickly superseded by the long-lived Subaru Rex model.