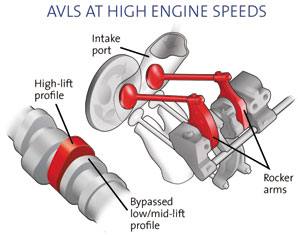 The I-Active Valve Lift System (i stands for intelligence) or i-AVLS is a valvetrain technology implemented by Subaru in the 2.5L naturally aspirated engines to improve emissions, efficiency and performance. Note that AVLS is different from AVCS used on other Subaru engines.

To select different valve lift modes, oil pressure generated by the engine moves a pin which locks the two lobes together. At low engine speeds the low/mid lift camshafts increases the speed of air rushing into the engine thereby increasing torque and efficiency. At higher engine speeds the high lift camshafts fully open the intake valves, reducing resistance to incoming air and improving power. It should be noted that AVLS only operates one of the intake valves in each cylinder as the other is always open to promote swirl.