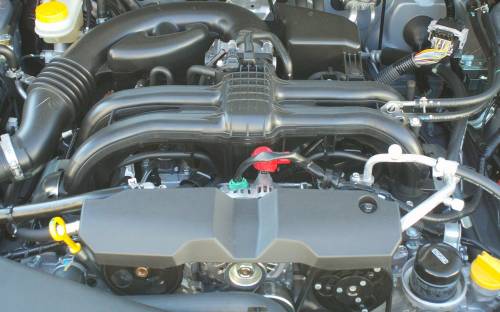 The FB has an all new block and head. It has DOHC, with intake and exhaust variable valve timing (AVCS - Active Valve Control System), and a timing chain that replaced the timing belt. Moving to chain-driven cams is said to allow the valves to be placed at a narrower angle to each other and shrink the bore of cylinder from 99.5 mm to 94. It results in less unburned fuel during cold starts, thereby reducing emissions. Subaru is able to maintain the exterior dimension substantially unchanged by asymmetrical connecting rods like those in EZ36. The FB is only marginally heavier. Car and Driver is told direct injection will be added soon. Subaru claims a 28-percent reduction in friction losses, mainly due to lighter pistons and connecting rods. The FB has a 10% improvement in fuel economy with the power coming on sooner and the torque band being broader.