Automotive manufacturer of Indianapolis , Indiana.United States from 1911 to 1939 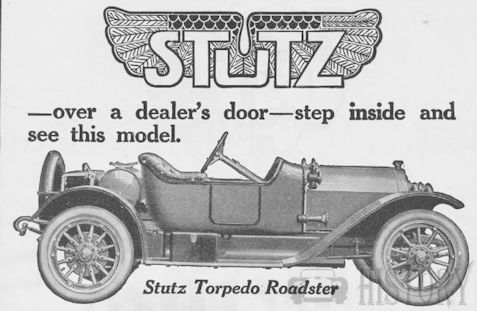 The Stutz Motor Car Company of America , was an American manufacturer of luxury class automobiles , of the "legendary American Thoroughbred brands before the war" . The Stutz models had the reputation of exceptional sportiness. In 1936, after economic difficulties, the company stopped producing automobiles.

Engineer Harry C. Stutz , born in Ohio in 1876 , has been involved in the construction of prototype motorized carriages since 1898 . He had become more involved in this subject over the years. In 1910 he founded the Stutz Auto Parts Company for parts production and 1911 the Ideal Motor Company for vehicle production. Both companies were in Indianapolis in the US state of Indiana. In 1911 began the automobile production. The brand name was Stutz .

In May 1913, Stutz joined the two companies together and chose the new name Stutz Motor Car Company of America .

In the following years, Stutz dealt with the development of his roadster, which he called Bearcat , and achieved further success. In order to meet the increasing capital requirements resulting from the construction of a new production facility and the expenses for research and development, Stutz converted his company into a public limited company in 1916 .

In 1919, the company was taken over by its major shareholder Allan Ryan. However, this had to file for bankruptcy two years later, and the company was taken over by a group of financial investors. The American engineer Frederick E. Moskowics has since led the company. In the mid-1920s, he initiated a change of course: the production of roadsters was discontinued in favor of luxury sedans, of which several models were presented in the following years. Nevertheless, the Stutz models still had sporty performance. 1929 was completed with the Blackhawk the last model under Moskowics' leadership, who gave the following year, the business of Edgar Gorrell. From 1929 to 1930 was a model under the brand Blackhawk distributed.

The global economic crisis drove society to the brink of financial ruin. The Stutz models, which were usually very expensive vehicles, no longer met the taste of the affluent clientele. The customers preferred quiet, comfortable automobiles, requirements that Stutz could not fulfill with his still sporty designed models. In the 1930s Stutz therefore sold far fewer vehicles than the competing brands annually Cadillac , Packard , Lincoln and Pierce-Arrow, In 1930, 649 vehicles were created, and in 1932 and 1933 there were less than 50 copies each. In 1932 Stutz made a loss of $ 315,000, in 1933 the loss was half a million US $ and in 1934 another $ 250,000. Regardless, the company offered its high-priced cars until 1936, but sold only a few copies annually. In 1936 Stutz made only six cars. This year, Stutz tried to mass-produce a small van called Pack-Age to increase revenue. However, the company was no longer able to get the car ready for mass production. Overall, only 28 pack-age.

On April 3, 1937, the Stutz Motor Car Company applied for the opening of bankruptcy proceedings. The company's debt had risen to $ 733,000 at this time. Since the creditors could not agree on a restructuring of the company, Stutz was in 1939 dissolved. The pack-age was taken over by the Diamond T Truck Company .

Stutz offered in the 1930s two series, which differed primarily by the motorization. The SV16 series was powered by an inline eight-cylinder engine with two valves per cylinder. The much more expensive DV32 had the same base engine but four valves per cylinder. Its maximum output was 161 hp at 3900 rpm. Both models were offered until 1936, but the plant could make only minor technical changes over the years due to limited financial resources. The development of a twelve-cylinder engine like Lincoln or a V16 like Cadillac or Marmon could not afford Stutz. Instead, the company experimented with a superchargerHowever, due to its volume was not compatible with the comfort requirements of the clientele and therefore was not produced in series. For both series Stutz offered in the 1930s various bodies, which were partly designed by independent body manufacturers and were delivered. Weymann , Fleetwood , LeBaron and Waterhouse made some superstructures on behalf of Stutz.

This brand name was introduced in 1929 for a few models that were less powerful and not so high-end, but cheaper. In 1929, 1310 vehicles were sold. In the following year, the number dropped to 280 vehicles. Then the brand was discontinued. The offer included two models that had the same wheelbase of 324 cm. The model L-6 , written the following year without a dash, had a six-cylinder engine with 85 hp . An eight-cylinder engine with 90 hp power drove the Model L-8 and 1930 Model L 8 at. There was a choice of two- and four-seater Speedster , two and five-seater coupes , convertible Coupé, five-seater sedan and four- to five-seat bodies with Weymann body called Chantilly , Deauville and Monaco .