The Studebaker Wagonaire was a combination estate type car. The Wagonaire had as a special feature a rear roof section, which disappeared as needed roof-like in the front roof part; this allowed the transport of bulky, high-quality goods that otherwise would not have fitted in a standard station wagon. , of the Studebaker in (Indiana) South Bend was manufactured from 1963 to 1966.

The Wagonaire had as a special feature a rear roof section, which disappeared as needed roof-like in the front roof part; this allowed the transport of bulky, high-quality goods that otherwise would not have fitted in a standard station wagon.

The unique roof of the Studebaker Wagonaire was invented by industrial designer Brooks Stevens , who was commissioned by Studebaker President Sherwood Egbert to expand the limited range of models without spending too much money. Ironically, Stevens was also the designer of the Jeep Wagoneer , an SUV that remained in production until the 1990s.The Wagonaire, which is modeled on that of Stevens in 1959 commissioned in the body Reutter in Stuttgart Study Olin Scimitar , based on the body of the regular wagon version of the Studebaker Lark , which was adapted above the waistline of the new interpretation. The roof over the loading area, which could be moved by hand forward over the rear seats and locked there, made the car unique. This interpretation enabled the transport of an upright refrigerator.

The Wagonaire could accommodate six people (five with the optional front seats), but could also carry eight people if it was equipped with a third row of seats, which was available until 1965 as an optional extra. Vehicles with this third row of seats had called "run-flat" tires - a "captive-air" system that allowed them to continue their journey after a puncture without changing tires. This was necessary because there was no space for a spare wheel due to the third row of seats. 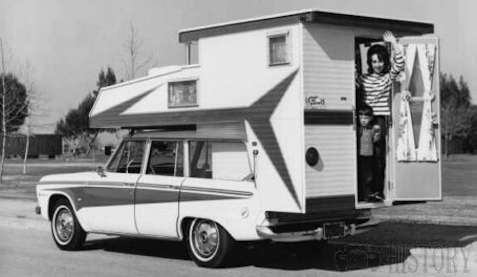 Buyers earlier Wagonaire found that the sliding roof at its front end allowed water to penetrate. The problem was tackled with modest success. Because of these difficulties, a station wagon with fixed roof was launched in January 1963 quickly parallel to the Wagonaire. It cost $ 100 less than the Wagonaire with sunroof, but was a special edition and had to be ordered separately from the dealer.

As Studebaker closed the plant in South Bend (Indiana) and continued production in Hamilton (Ontario) in Canada , the prestige models Avanti and Hawk were discontinued, but continued to build on the Lark-building sedans and Wagonaires.The models 1964, which were made only in Canada from December 1963, were the last Studebaker with engines from its own production. From 1965, General Motors supplied to Studebaker Chevrolet-series six-cylinder and V8 engines. In 1965 there were only more combination models with the sunroof.

The models with a fixed roof were available again in 1966, but the third row of seats was no longer available. Furthermore, 1966 from the Wagonaire was a separate model with the body trim parts of the Commander and the interior of the sporty Daytona . Only 940 Wagonaires were built in model year 1966, models with a fixed roof are accordingly rare. 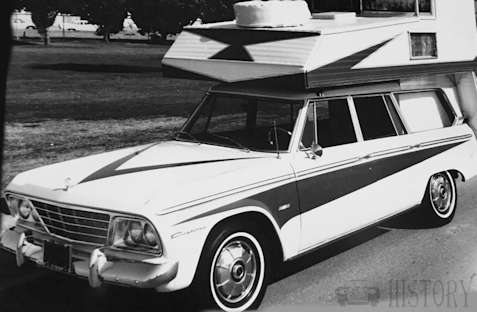 The Daytona version of the Wagonaire from 1963 to 1964 can be considered as a pioneer of today's powerful combination versions. Equipped with a 4,737 cc V8 engine, Carter four-carburettor and manual transmission with steering wheel control and overdrive , the Wagonaire was able to compete with many muscle cars of its time. In addition, the Wagonaire could be ordered right from the start with all high-performance Avanti V8 engines of the Studebaker "R-Series" and with a four-speed, four-speed gearbox. Very few copies were actually ordered in this version. 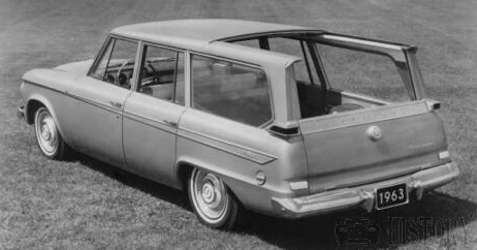