The Studebaker Electric was a car with electric drive , built by the Brothers Manufacturing Company in South Bend . The battery-powered cars were offered between 1902 and 1912.

Studebaker began producing automobiles in 1898, when Frederick Samuel Fish , then President of Studebaker, persuaded the owners' meeting to invest $ 4,000 in the development of electric cars. Even without the full support of the owners, this project provided a car. However, the company also began producing bodies for electrically powered taxis manufactured by the Pope Manufacturing Company .

Commercial production did not start until 1902, and the company opted for battery-powered vehicles because they were clean, easy to load and work well in larger cities even without gas stations.

There was the Studebaker Electric with various body types that were often derived from the company's earlier coach manufacture, for example Stanhope , Victoria and Surrey . From 1904 there was a car with four seats.

Fish realized early on that Studebaker's future was not in the electric car with all its limitations, but in the gasoline-powered vehicle. Studebaker's experience was in wheelwrighting and vehicle sales, not so much in engine manufacturing. This finding led to the founding of Studebaker-Garford in 1904 . The collaboration worked well until 1909/1910 Garford branched off chassis for the construction of their own cars and Studebaker came in search of a low-priced car on the Everitt-Butcher Flanders Company in Detroit . EMF was to manufacture the entire car and Studebaker wanted to sell it through his coach dealers.

Studebaker continued to produce electrically powered vehicles until John Studebaker , Fish's father-in-law, sought control of EMF in 1909 and actually did so in 1910.

John Studebaker also saw in 1912 that automobiles would have petrol engines in the future, and so ended the small-scale production of electric cars. 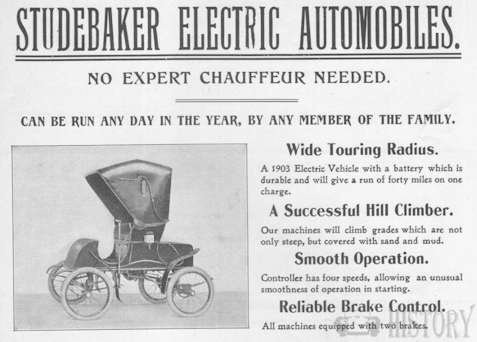