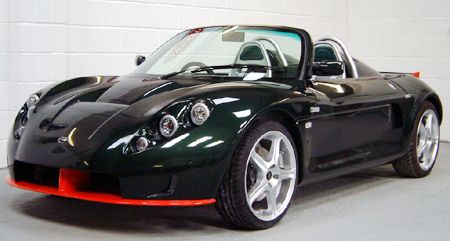 Strathcarron Sports Cars plc was a British car manufacturer in business from 1998 until 2001.

Strathcarron produced two models while in business between 1999 and 2002, the Strathcarron SC-5A, and the Strathcarron SC-6, which in essence was the same as the SC-5A, only with ABS plastic bodywork in place of the more expensive kevlar and carbon fiber. The company's founder, Ian Macpherson, now Lord Strathcarron, is the son of David Macpherson who was a noted motorcyclist and automotive columnist.The goal for the company was to build simple and lightweight cars powered by motorcycle engines. The cars were designed by Reynard and used Triumph motorcycle engines and were minimalist in terms of options and amenities.

Initially, the company planned to send 50 to 60 cars out of their factory once the firm was fully up and running during the year 2000. However, due to changes in England's Single Vehicle Approval laws during the time Strathcarron was beginning to sell the cars to customers, the company had to go back and reconsider using the engine out of an automobile in order to legally sell the car for public roadway use. An attempt was made to use the Rover K-Series motor, but financial hardship forced the company to shut down before a working prototype could be completed and road tested.

The company produced sports cars. Reynard Motorsport had designed the chassis . The design for the body came from Simon Cox. The doorless roadster body made of aluminum offered space for two people. The vehicle was at a wheelbase of 2388 mm 3607 mm long, 1702 mm wide, 1194 mm high and weighed 560 kg. The engine was mounted in mid-engine construction behind the seats and powered by a six-speed gearbox to the rear axle. The SC-4 was the base model. A motorcycle engine of Triumph Motorcycles with 1,200 cc displacement and 125 hp power drive to the vehicle. In the model SC 5 Adelivered an uprated engine 140 hp. The SC 6 was planned in 2001 as a starter model at a price of less than £20,000 .