The SsangYong Rodius (sold in some regions as the Stavic) is a large MPV released in early 2004 by the Korean automaker SsangYong Motor Company. the name Rodius is combination of road and zeus. It is available in 7, 9, and 11 seat configurations (3 or 4 rows), a 5-seater version is also available in Hong Kong The seats can be folded to act as tables or folded further (double folded) to add extra cargo area. They can be turned around, encouraging conversation and can be sided forward and backward.

In August 2007, the Rodius received a facelift.

Afterwards, because of poor popularity, the Rodius was discontinued without a direct successor on December 31, 2011.

However, on July 2, 2012, the Rodius returned with the new name Rodius Euro and this comes with the e-XDi200 diesel engine that produces 155PS of power and it's available in either a 6-speed MT or an E-Tronic Benz 5-speed AT.

The car was designed by Ken Greenley, former head of the automotive design course at the Royal College of Art in London. The design goal was to capture the essence of a luxury yacht

In 2005, the Rodius won the dubious distinction of being voted "the ugliest car ever made" by visitors to motoring website CarData and is described by Top Gear Magazine as a car: "that looks like it got bottled in a pub brawl and stitched back together by a blind man" and the car also won the Top Gear Magazine WTF Award for 2009.

It also got described as: "having a face like a burnt thong" by the Australian magazine Wheels.

In 2010, the Australian magazine liftout of the Sydney Morning Herald, Drive Life, described the car as being "so cack-handed in every aesthetic department it makes the average people-mover owner feel like they are getting about in an ultra-stylish Italian sports machine", later going on to call it a "collapsing bus shelter on wheels".

The second generation Rodius, called Korando Turismo in South Korea, was revealed in February 5, 2013 and it will first shown at the 2013 Geneva Motor Show with sales start soon this year.

The new model comes with a nine-, ten- or eleven-seat configuration and can offer up to 3,240 liters of cargo volume. Powering the new Rodius/Korando Turismo is the 2.0-liter turbodiesel engine connected to either a 6-speed manual gearbox or a 5-speed Mercedes-Benz-sourced automatic transmission. 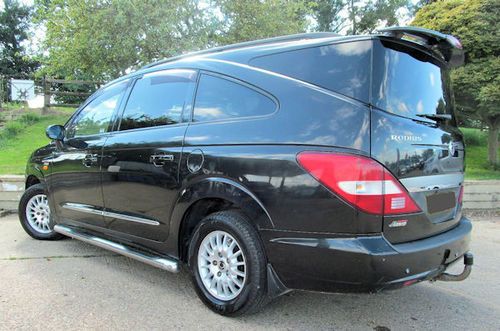