The SsangYong Korando is a sport utility vehicle (SUV) built by the South Korean automobile manufacturer SsangYong Motor from 1983 to 2006 and from 2010 onwards. The name Korando is a contraction of "Korea Can Do". 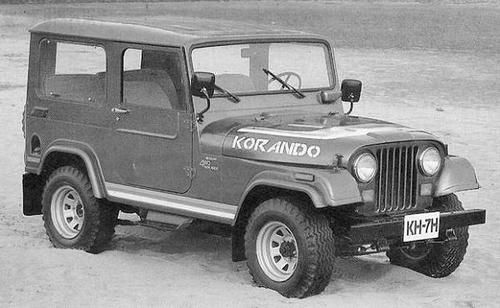 The second generation "New" Korando was released in Asia in 1996 to compliment the SsangYong Musso (released in 1993), released in Europe in 1997 and in Australia in 1998, based on a shortened version of the Musso's chassis The 1.8 tonne 3-door mini SUV was designed by Professor Ken Greenly

It features a choice of 2.3 litre and 3.2 litre gasoline engines or 2.9 litre diesel engine, all produced on license from Mercedes-Benz, accompanied by a 5-speed manual Borg-Warner gearbox. The interior of the second generation Korando was unique because it had a steering wheel arch on either side. This was to make converting to right-hand-drive easier. On the passenger's side, a handle was fitted in the arch. This generation was sold as the Daewoo Korando from 1999 to 2001, as Daewoo took over SsangYong, but it was later forced to sell the company.

The 2004 SsangYong Korando was merely just an upgrade of the second generation. Production ended in 2006. Sales however in many markets continued through to 2007 due to remaining stock. It was available with a variety of petrol and diesel engines, including a 2.9-litre 5-cylinder diesel from Mercedes-Benz. In 2008, Russian TagAZ began to assemble Korando as the TagAZ Tager, not only 3-door version, but also specially created 5-door version.

The third generation Korando, codenamed the SsangYong C200 began production in late 2010. It is to be the first car to be released as part of SsangYong's revised lineup. It has slightly longer wheelbase than its rivals, the Hyundai ix35 and Kia Sportage. The decision to name the C200 the Korando was done so by SsangYong. The car will be sold in Russia as the SsangYong Actyon.

The third generation Korando was initially released with a 6-speed manual transmission and a 6-speed DSI model M11 automatic transmission and is in production from May 2011. It is also to be offered as a 2-wheel-drive or four-wheel-drive from launch. Its combined fuel consumption is 5.5 L/100 km and acceleration from 0–100 km takes less than 10 seconds. The engine available upon release was a 2.0 liter turbodiesel producing 175 horsepower. Petrol engine was introduced in 2012.

The Korando comes with 6 airbags as standard. The trunk capacity is 480 liters; however this can be expanded to 1300 liters when the seats are folded down.

The new Korando was well received from a design perspective, with many reviewers noting design improvements over previous models. Interior space too, was praised, as was the all-new monocoque chassis. It became SUV of the year in Macedonia for 2012.

The original concept, the C200, debuted at the 2008 Paris Motor Show and has since been shown at many others. The concept received mostly positive feedback and was thought by many to be the vehicle that can turn SsangYong's reputation for having cars with questionable styling around.

The concept car C200 Aero made its debut at the 2009 Seoul Motor Show. It was released one year later as Korando C with almost no modification of the original Giugiaro design.

The C200 Eco made its debut at the 2009 Seoul Motor Show. It is a hybrid which uses both a diesel engine and an electric one (powered by a 340 volt battery). It also uses a stop-start system which shuts off the engine during stops. Fuel saving will be around 25% The interior features a green trim and an airy cabin.

Launched at the 2010 Busan International Motor Show, the new Korando C concept has stayed mostly the same as the previous concepts but has more aggressive styling and is said to be a representation of the production version. Performance-wise, the new concept has a 2.0-litre turbo-diesel engine and a confirmed power output of 135 kW (184 PS; 181 hp) and 360 N·m (270 lb·ft) of torque. The interior is similar to that of the C200 Eco.

Launched at the 2010 Busan International Motor Show, the new Korando EV was a fully electric version of the Korando C.It has a top speed of 150 km/h, and a range of 180 km.