The SsangYong Actyon (pron.: /ækˈtiːən/) is a compact sport utility vehicle (SUV) built by the South Korean automobile manufacturer SsangYong Motor from 2005 to 2011 for the first generation and 2012 to present for the second. It was available either as a wagon (Actyon) or as a pick-up truck (Actyon Sports). They replaced the SsangYong Musso and Musso Sports.The name is an amalgam of the words "action" and "young".

The vehicle also comes with double wishbone front suspension and a five-link rear end as well as the availability of ESP (Electronic Stability Program) is a big offering from the South Korean manufacturer. Along with ESP, the Actyon comes with hill descent control as standard (on some models).

In Australia, there is a special version of the Actyon Sports called the SsangYong Tradie. Available both in 4x2 and 4x4, but only with a 5-speed manual transmission and white exterior color. Optional equipment includes keyless entry, dual airbags, speed-sensitive central locking, engine immobilizer and alarm, electric windows, child safety door locks and tray liner.

Initially offered with a 4-speed automatic, the Actyon was later upgraded with a 6-speed automatic transmission sourced from Australian company Drivetrain Systems International.

In 2008, Phoenix Motorcars in Ontario, California introduced the Phoenix SUV and Phoenix SUT for fleet managers. These 2 Electric-powered vehicles based on the design of the SsangYong Actyon SUV and SUT. The production to the public is possible by 2010.

In 2010, the Actyon received a facelift.

In 2012, Ssangyong launched an updated version of the Actyon Sports pickup, which in the Korean market is called Korando Sports. It is essentially a production version of the SUT-1 Concept Car as seen on the 2011 Geneva Motor Show. 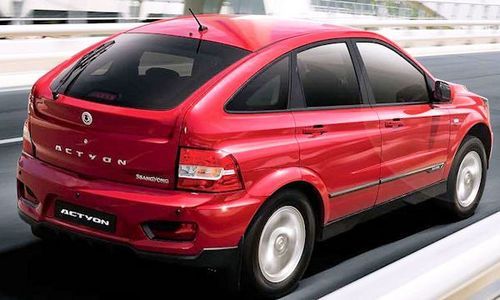