The SS Cars Ltd Model 100 "Jaguar" was so named as the '100' reflecting the capability of the 3.5-litre model to exceed 100 mph - then a remarkable speed for a production vehicle. In common with many products of the thirties, the adoption of an animal name was deemed appropriate, and once approved by Sir William Lyons the name "Jaguar" was given to a new saloon car in 1936, and from that point to all the cars.

Following the Second World War, because of the connotations then attached to the initials ""SS", the company was renamed Jaguar in 1945.

The chassis had a wheelbase of 8 feet 8 inches (2.64 m), and was essentially a shortened version of the one designed for the 2.5-litre saloon, a car produced in much greater numbers, and first been seen in the SS 90 of 1935. Suspension was on half-elliptical springs all round with rigid axles. The engine was a development of the old 2.5-litre Standard pushrod unit converted from side valve to overhead valve with a new cylinder head designed by William Heynes and Harry Weslake. The power output was increased from 70 bhp (52 kW) to 100 bhp (70 kW). Twin SU carburettors were bolted directly to the cylinder head. In 1938 the engine was further enlarged to 3.5 litres and the power increased to 125 bhp (93 kW). The four-speed gearbox had synchromesh on the top 3 ratios. Brakes were by Girling. The complete car weighed just over 23 cwt (2600 pounds, 1150 kg).

Widely considered to be one of the most aesthetically pleasing Jaguar cars it is also one of the rarest, with only 198 of the 2.5-litre and 116 of the 3.5-litre models being made. Most stayed on the home market but 49 were exported. Cars in good condition will now regularly fetch in excess of £300,000. A near concours example was sold by auctioneers Bonhams at the Goodwood Festival of Speed back in 2007 for £199,500 but largely because of the rarity, auction prices for the SS100 have risen very strongly since then. 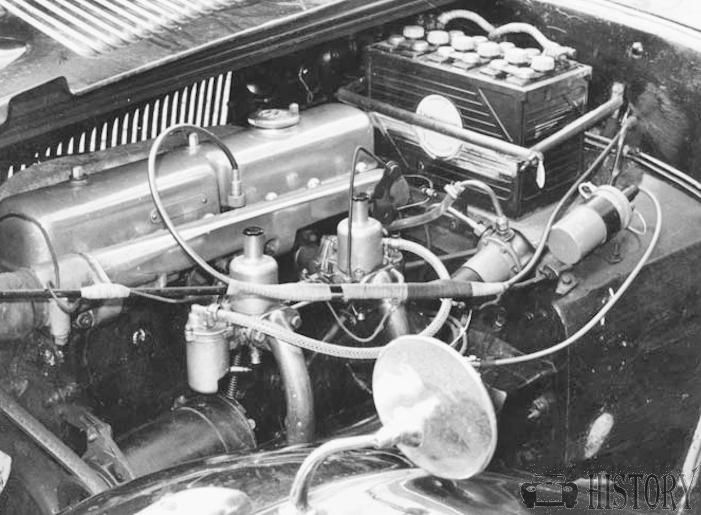 It was on an SS100 that the famous Jaguar 'leaper' was first prominently displayed, despite an inauspicious start. In mid 1936 the first version of the Jaguar vehicle mascot was apparently described by the founder of the company as "looking like a cat shot off a fence". A later publicity photograph of the new Model 100 "Jaguar" (registration mark CKV 250) parked outside the offices of SS Cars Ltd in early 1937 shows a revised Jaguar 'leaper' mascot mounted on he radiator cap. It is this more stylised 'leaper' that became the basis for subsequent mascots and the trade mark for Jaguar Cars Ltd that has been used to the present day.

The unnamed owner of the Belgravia vintage car dealer in James Leasor's 'Aristo Autos' novels, 'They Don't Make Them Like That Any More', 'Never Had a Spanner on Her' and 'Host of Extras' drives an SS100, and the car features prominently in the books.

The late Alan Clark MP owned a Jaguar SS100, and during his time in Margaret Thatcher's government was often to be seen piloting his SS100 away from the House of Commons after late Parliamentary sittings.

A number of replica and re-creations of the Jaguar SS100 have also been manufactured since the 1960s.

The Suffolk Sportscars  replicas/re-creations of the SS100 have been described as being the most visually and dimensionally accurate of the genre, with painstaking attention to detail.Acceptance of the Suffolk SS100 vehicles by both Jaguar clubs and specialist classic car registers  gives some credence to the description. Suffolk Sportscars are based in Woodbridge, Suffolk, United Kingdom, and the SS100 may be ordered and individually built by hand at the factory to the customers own specifications or alternatively may be ordered in component form for skilled home assembly.

The Suffolk SS100 uses the Jaguar XK6 engine, and commonly the 4-speed Jaguar 'Short Compact' gearbox as the drivetrain, and is still in limited production today with 8-12 cars being produced each year. With exports to a number of countries worldwide which include the USA, several European nations, Australia and New Zealand, the Suffolk Sportscars SS100 is probably the most prolific replica of the Jaguar SS100. The Suffolk SS100 was designed from the outset to create an exacting 'visual facsimile' of the genuine car. The accurate dimensions and such features as the original Lucas QK596 headlamps, dummy Andre Hartford friction dampers, the original design windscreens and fly screens mean that it takes a real enthusiast to spot the differences in a passing car. Because of the increasing rarity and high value that a genuine Jaguar SS100 can command, a small number of owners with these cars have commissioned the building of identical Suffolk SS100's, allowing the owners the use of an almost identical vehicle without risking damage to the original. Suffolk Sportscars also manufacture a replica of the famous C-Type Jaguar that is similarly designed to be visually and dimensionally accurate, and uses the original 'live axle' setup of the original car for authenticity.

The Steadman TS100 is described as a 'reproduction' of the SS100 manufactured by Ottercraft Ltd in Hayle, Cornwall, United Kingdom, during the late 1980s and early 1990s. The actual build numbers for this car is unknown, but it is thought that a maximum of twenty-eight of these vehicles were assembled, and were also referred to as the Jaguar Steadman TS100. The Steadman TS100 was never intended to be a replica of the SS100 of the 1930s, but was designed to be a sports car in its own right.

With a hand-built aluminium body, the Steadman TS100 used unadapted Jaguar XJ6 running gear and was sold as a high quality, more modern version of the Jaguar SS100. Dimensionally and visually, the Steadman TS100 was quite different from the original Jaguar SS100. These differences occurred because the manufacturers were forced to change the original proportions to both accommodate the wider track of the donor car and allow the use of more readily available smaller, wider wheels. Attention was paid to styling detail during design (such as the use of appropriately large headlights) and at the time of production, the Steadman TS100 was regarded as more successful than most other evocations. With an unknown number surviving, this re-creation is a rare sight at classic car events.