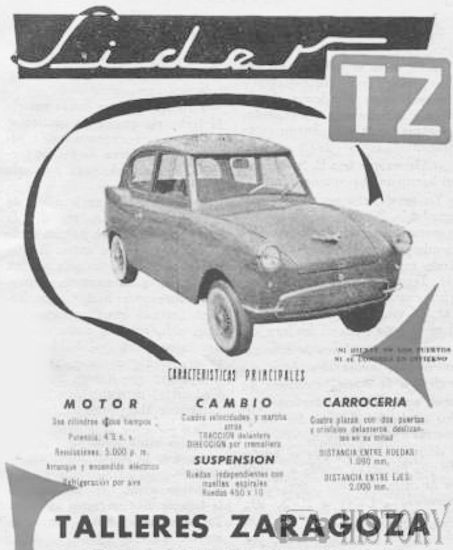 The Talleres Zaragoza SA produced between 1956 and 1960 in Zaragoza a Spanish small car , they called this the TZ Síder .

The production of Talleres Zaragoza SA was located on the Paseo San Juan de la Pena 42 on the left bank of the Ebro . This appeared simultaneously with the Seat 600 in the Spanish market, which was then protected by tariffs and import quotas.

The Síder was manufactured between 1956 and 1958,  All manufactured models were red.Originally the model should be called " Líder " (Spanish leader) because an L appeared much more aesthetic. But when the patent was filed, the patent office learned that there was already a patent on a Líder, whereupon it was decided to " Síder ", because you can read the "L" as "S".

The car was compared to its competitors, the Lloyd Alexander , the Goggomobil , the BMW Isetta or the Messerschmitt cabin scooter quite as a modern construction, because it had a self-supporting body in pontoon form . To compensate for the flat windscreen, it had a panoramic rear window similar to the Opel Rekord P1 . Even the independent suspension at that time was by no means common property.

Transmission : four-speed gearbox with four forward and one reverse gear with a single-disc dry clutch