Automotive manufacturer of Madrid.Spain from 1958 to 1960. 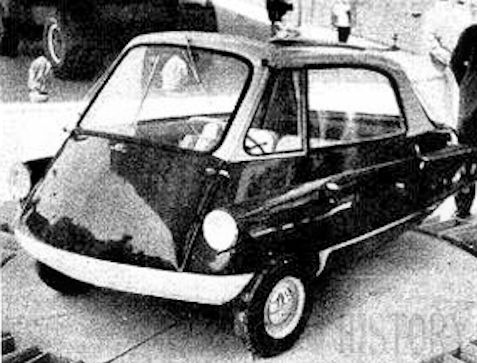 The company Industrias Motorizadas Onieva SA from Madrid made under the direction of Rafael Onieva Ariza since 1952 motorcycles , at a trade show in 1958 when it Barcelona presented a car. While automobile production ended in mid-1959, motorcycle production continued until 1967.

The only self-developed model was a small microcar, a coupe with three wheels, in which the single wheel was behind. It was similar to the BMW Isetta , but had a longer wheelbase and a longer rear overhang. The interior could accommodate two people. For the drive provided either a one- cylinder two-stroke engine from Hispano Villiers with 197 cc displacement or a two-cylinder engine with 250 cc and 15 hp power. The engine was mounted in the rear and drove the rear wheel. There were only six copies, of which at least one still exists today.

In addition, in 1960 twelve copies of a four-wheeled flatbed truck, which resembled the Farmobil . A BMW twin-cylinder engine with a displacement of 600 cc propelled the vehicle.