Automotive manufacturer of Barcelona .Spain from 1957. 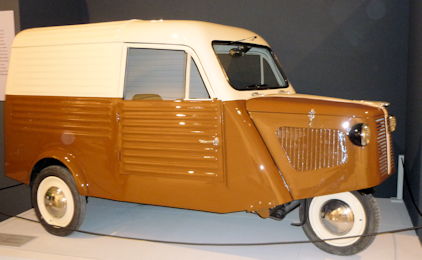 Motores y Motos SA was a Spanish manufacturer of motorcycles and automobiles .The brand name was Mymsa.

The company from Barcelona began in 1952 with the production of motorcycles, which ended in 1960. Automobiles were created only in 1957.  .

The model Rana 3-R was a 3 wheel with the single wheel at the front. The drive was provided by a single - cylinder two-stroke engine with 175 cc capacity and 8.8 hp , which was mounted above the front wheel. The transmission had three forward but no reverse. The rear rigid axle was mounted on leaf springs. The vehicles were as vans , two-seater and four-door four-seater, which could be opened, the roof. The model Rana 4-R had four wheels and was available only as a van and pick-up .