Automotive manufacturer of Madrid.Spain from 1916 to 1930. 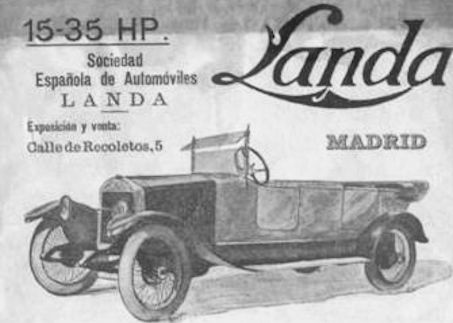 Automóviles Landa was a Spanish manufacturer of motorcycles and automobiles,and as Talleres Landaluce (until 1922)

Juan A. de Landaluce founded in 1916 in Madrid the company Talleres Landaluce and began production of motorcycles and automobiles. From 1923 the company was Sociedad Española de Automóviles Landa . In 1930 the production ended after about 400 manufactured copies. The brand name was Landa .

In the first model 7 HP provided its own two-cylinder two - stroke engine with 735 cc displacement (76 mm bore , 81 mm stroke ) and 12 hp power for the drive. The following model 9 HP was a sports car. Bore and stroke were increased to 90 mm each. Thus, the engine capacity was 1145 cc and the power 20 hp. A vehicle of this type won in 1920 at the mountain race Cuesta del Alto de los Leones . in 1921 was followed by a model with a four-cylinder - four-stroke engine from Lycoming, 3160 cc and 32 hp. After 1923, only models with six-cylinder engines of Lycoming with 4741 cc and 47 hp produced in small numbers. These vehicles were mainly used as taxis , hearses and fire trucks.