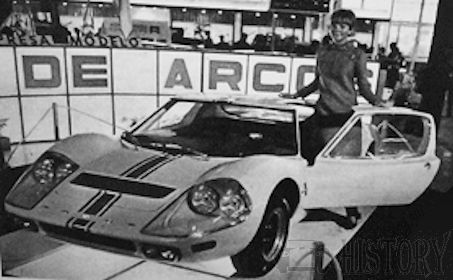 The company José Artés de Arcos SA of Barcelona began in 1966 with the production of automobiles. In the 1970s, production ended.

Guepardo.The Guepardo were  racing cars of Formula 4.  The official presentation of the vehicles with Fiat engines with 850 cc capacity was made at the Barcelona Motor Show 1966. However, a version of Guepardo as Formula 3 was unsuccessful.

Campeador .The Campeador was presented in 1967 at the Salón del Automóvil in Barcelona. This was a sports car with rear engine and fiberglass body and resembled the Ford GT40 . The four-cylinder engine with 1255 cc capacity made 103 hp and came from the Renault 8 Gordini . For the planned series production an engine of Seat with 1500 cc of displacement and 140 HP should be used. But it did not get to that. The vehicle remained a unique piece. It has been preserved and can be visited in the Col·lecció Ramón Magriñá i Berga in Masllorenç .

Gato Montés.This is a six-wheel amphibious vehicle . It was presented in 1971 at the Salón del Automóvil in Barcelona and then produced in small series. For the drive provided either a Bultaco engine with 250 cc displacement or the two - cylinder boxer engine from the Citroën 2CV with 602 cc displacement. A vehicle can be visited at the Automuseum Collecció d'Automòbils de Salvador Claret in Sils .