Automotive manufacturer of Valladolid,Spain from 2010 on 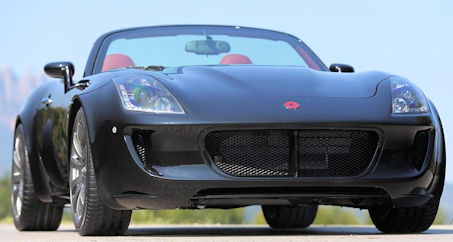 Tauro Sport Auto was a Spanish manufacturer of luxury sports cars based in Valladolid, founded in 2010,when a group of Spanish businessmen joined with a British manufacturer of racing cars to create the company.They are produced in small series and made to order, with much of the manufacturing process done by hand..

Their most popular model is the Tauro V8, it is based on the mechanical underpinnings i.e. chassis of the Pontiac Solstice and is powered by a Chevrolet-sourced powertrain as its base engine and is offered in four variants: Spider,Coupe, Saeta and Portago. The Spider is based on the Kappa platform, purchased from GM. New body styling and a range of big V-8 has replaced the turbocharged four cylinder, the interior design has now some modifications, upgraded in materials and given a variety of colors. The Tauro's core markets include the European Union, Russia, United Arab Emirates, China, and America.

All models are called the Tauro V8

The Tauro V8 Spider takes us back to the traditional formula of front engine and rear wheel drive that defines the pure roadster.

The Tauro V8 Coupé is close to Muscle car, a hardtop versión.

The Tauro V8 Saeta takes its name from the first jet plane made in Spain in the mid-twentieth century, the Hispano Aviación HA-200 Saeta and incorporates elements from the competition.

The Tauro V8 Portago goes back to the Barchettas models of the 1940s and 50s. Its name is in honor of Marquis of Portago, Spanish F1 gentleman driver, dead in the 1957 Mille Miglia edition while piloting a Ferrari official.