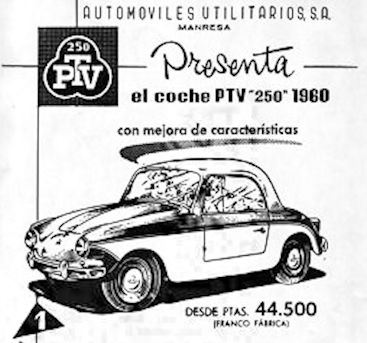 PTV was a trademark of Automóviles Utilitarios S. A. a microcar manufacturer based in Manresa, near Barcelona, Spain. The PTV brand was at one time the second biggest volume microcar sold in Spain, beaten only by the Biscúter. Compared to the Biscúter it was more luxurious, offering proper doors, two-tone paint, chrome trim and 12 inch wheels.

The first prototype was finished in 1956 and it was powered by a in-house developed rear mounted 250 cc engine giving 13 hp (10 kW) and a top speed of 95 km/h (59 mph). Later it was replaced by a 350 cc engine. However, when Fiat licensed the Fiat 600 construction in Spain as SEAT 600 sales dropped and the company reformed as AUSA Center SA, a constructor and supplier of industrial machinery and light vehicles, with branches in Madrid Spain, Perpignan France Rochdale England, Hamm in Germany Alberta Canada and Beijing China.

The story begins with vehicles that the brothers Tachó developed in 1950 La Ballena (The Whale) and in 1953 The Coca that were both marketed under the Tachó brand name.

Guillem and Antoni Tachó were joined by Maurici Josep Vila Perramón and together they founded the company Automóviles Utilitarios, S.A. on May 4, 1956. The trade-mark PTV comes From Tachó-Perramón vehículo plus a distinctive number.

The PTV 250 was the first model produced. in 1956. It was an attractive 2-seater convertible (2 + 1 according to the advertising brochure) with a rear-mounted 250 cc single-cylinder,11 horsepower (c. 8KWmotor, and capable of speeds up to 75 km /h (about 45 mph). There were two versions: either with or without doors. A total of 1100 units were produced un to 1961, which ranks as the fourth (by volume) micro-car sold in Spain, after the Biscúter, the Goggomobil and Isetta. Prices ranged between 44,500 and 55,000 Ptas. They were mostly marketed in Spain with some units exported to Portugal.

Specification of the PTV 250

Specification of the PTV 400