Automotive manufacturer of Barcelona.Spain from 1929 to 1932. 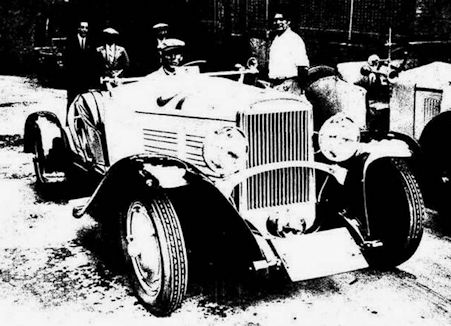 Nacional Pescara was a Spanish car brand from the late 1920s.

Raúl Pateras Pescara and his brother Enrique Pescara founded in 1928 in Barcelona, the company Fábrica Nacional de Automóviles SA and began in 1929 with the production of automobiles. Since the state supported the company with tax breaks, it bore the name Nacional in the company. 1932 ended production. The figures for the production figures vary between five  and 14. Two vehicles still exist today.

OHC model The first model had an eight - cylinder in - line engine with OHC valve control , which made from 2960 cc capacity 80 hp. The engine consisted mainly of light metal. The transmission had only two gears. A special feature were four built-hydraulic jacks, which enabled a quick wheel change. The vehicles were also used in car racing. So Enrique Pescara won his class in July 1930 in the Peña Rhin hill climb . The designer was the Italian Edmondo Moglia.

DOHC model The second model had a revised engine with two overhead camshafts. This increased the engine power to 125 hp. With a shortened chassis , a racing car body and a three-speed gearbox, the vehicle took part in 1931 at the Kesselberg in Kesselberg and until 1936 at many other races. The Chilean racing driver Juan Zanelli won the 1931 European Mountain Championships .

Ten-cylinder model The company was working on a model with a engine with 3900 or 4100 cc, which should provide 100 hp without charging. For racing purposes, a compressor was also provided. The political situation in Spain put an end to this project before it was completed.

Sixteen-cylinder engine In cooperation with Gabriel Voisin , a sixteen-cylinder engine was developed. The engine made from 3600 or 4000 cc displacement 150 hp.SLM-Pescara Raúl Pateras Pescara moved to Switzerland in 1933 . The Swiss locomotive and machine factory produced in 1935 a vehicle with the V16 engine . Chausson made the chassis.