Vehicle manufacturer Pontenova Spain From 1963 to 2006 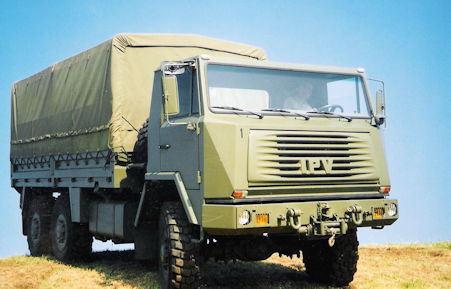 IPV ( Investigation and Projects of Special Vehicles, SA ) was a Galician automotive brand , based in A Ponte Nova , in the province of Lugo ( Spain ). Closely linked to the area and its orography and landscape, being closely linked to the forestry, mining and agricultural industry of the province. Its main activity was the production of trucks. Former IPV workers were the founders of URO in 1981.

Among the many vehicles arrived in Spain during the civil war were 328 Italian OM 35 carts . These were used to transport troops. The few that survived piled up in the barracks were auctioned by the Army in the 1950s. Due to their technical characteristics, they were mostly acquired for forestry exploitation in the north of the peninsula, with the great majority falling in the province of Lugo . As there was a great shortage of spare parts in those years, several workshops in this area specialized in their repair and they were making improvements (such as engine changes and new boxes). Even new carts are being manufactured in a traditional way.The great specialization carried out by three automotive workshops that were for years arranging these small 4x4 trucks ends with the constitution of the Miranda Company, Alonso, Fernández, SA (MAFSA) on May 2, 1963. The object of the company would be approve a prototype before the Ministry of Industry and its subsequent commercialization.

At first, Mafsa manufactured only a narrow axle truck specifically designed for the Galician timber industry. The elaboration was still quite artisanal and since there were no distributors, the carts were sold only in the factory.In 1968 the model 950 appears equipped with engines Barreiros D-60.34 of 3770 CC or Perkins 6-305 of five liters of displacement. Both with a power of 90 HP and 92 HP respectively. Its success allowed Mafsa to expand into multi-purpose 4x4 trucks, which were in high demand for firefighting and construction uses.

At the beginning of the 70s a network of distributors was established (Galicia, Asturias, Cantabria, León, Madrid and Barcelona) and the brand was consolidated. The 500 L and 750 P models appear with Perkins-Hispania engine 4,203 D (3,330 CC and 64 HP). With the 950 P, the Barreiros engine option disappears.

In the 1980s the models are updated, the range being:

At the end of the 80s, the range was extended with four engines and nine different battles, remaining in the beginning of the nineties:

In May 1999, Mafsa becomes Research and Projects of Special Vehicles, SA The IPV range grew to 270 hp and 24 ton vehicles, while OEM engines were replaced by MAN engines . Also the cabins were redesigned and modernized. Some special models were also created, such as a bimodal road-rail truck and a port tractor.

With the turn of the millennium the range was:

IPV presented suspension of payments in August 2006, but at no time stopped production. The company went through bad times. So much so that she was forced to voluntarily raise a bankruptcy proceeding that came out successfully and for which she has had the absolute collaboration of the Galician government, specifically SES Galicia and its general director, who has had a huge faith in IPV and in giving new impetus to the factory. SES Galicia has participated in a considerable way in the capital increase and has granted a very important credit. With this and other resources from other partners, the factory has very positive takeoff options.