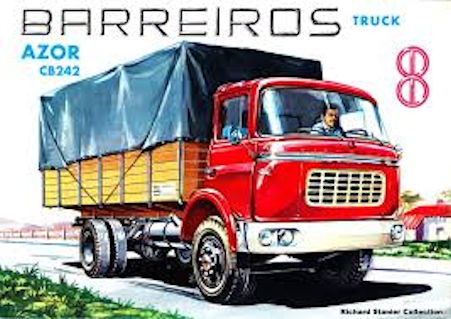 Barreiros was a Spanish industrial company founded by Eduardo Barreiros . The main business was the production of engines and bodies for trucks and tractors .

In 1945, Eduardo Barreiros bought a bus line that his father had owned in Ourense ( Galicia ). He then founded the company B arreiros E mpresa Co nstructora, SA (BECOSA). In the province of Orense, he made contacts with the Public Road Administration, where he fabricated parts and utensils for road construction. In the following years he decided to use gasoline engines in diesel engineswhich gave him a secure economic and financial basis for founding Barreiros Diesel with a capital of 10 million PTA in 1954. There he produced an average of three units per day of the EB-6 engine with the Barreiros technology (for use in trucks of 5 to 7 tonnes). He acquired an area of ​​initially 20,000 m² in Villaverde near Madrid . There he founded the company C ompañía Anónima de B ombas, SA (CABSA) to produce injection pumps and electrical equipment.

In the following years Barreiros produced there Dynamos , starters and regulators . Then he also produced generators , welding equipment and electric brakes for trucks. At that time Barreiros made tractors under license from Hanomag .In 1957 Barreiros won a competition in Portugal in a tender of 300 trucks for the Portuguese army against English, American and French competitors. This bonnet with 5 tons total weight already had a four-wheel drive and was offered under the name " el abuelo " (= the grandfather).

In 1962, Barreiros teamed with Chrysler to produce Dodge and Simca brand passenger cars . Here Barreiros offered a surprisingly large for in those years little motorized Spain Model range of: In addition to than in Germany Simca 1000 known rear-engine model that was offered 900 Special with 950 cc in Spain under the name Simca, Barreiros offered the as Simca 1100 known Frontantriebler with a 1200 cc engine originally offered only in Spain by Barreiros. In addition, Barreiros still had a Dodge, in which a factory-owned 3.7-liter engine provided the drive. Since 1973, this Spanish Dodge has also been in Switzerlandoffered. For Spanish taxi operators Barreiros offered a variant of the Dodge with a Barreiros diesel engine, which, however, had less driving comfort and driving style than the original petrol model. In 1965 and 1966, Barreiros produced on behalf Chrysler in small series the Crown Imperial Limousine , a representation vehicle, which had been previously manufactured at Ghia in Italy.

In the following years, the brands reached in that era unknown sales figures, which were associated with a turnover of 7 billion PTA. The company NAZAR in Zaragoza was taken over, in which the majority of the manufacturing elements for road construction machinery , tractors and buses wasconcentrated. A pioneering auto finance company was founded by Barreiros with a capital of 100 million PTA with a 60% stake.

In 1967, Chrysler acquired the majority of the corporation, but initially left the Barreiros family still in charge. By 1969, Chrysler had increased its stake further. Barreiros lost his influence in the company. This year, Chrysler completely absorbed his Spanish daughter.

Barreiros continued to produce solid diesel engines, trucks and buses. Articulated and articulated lorries were virtually unknown in Spain until the 1980s. But as well as the Spanish competitor Pegaso Barreiros had a heavy front handlebar model , a four-axle, whose two front axles were already steered and which was offered both as a flatbed, and as a dump truck. The vehicles and engines were so solidly made that it is still possible today to find trucks and tractors of the Barreiros brand in Spain.

When the Chrysler Group was in financial trouble in 1978, it sold its entire European activities to the Peugeot Group . The truck brand Barreiros Diesel SA was integrated into the Renault Group and thus disappeared definitively.

Although Barreiros contributed much to the improvement of diesel engine technology, as well as many vehicle elements of heavy machinery, he did not receive the deserved recognition for his work. In the 1980s, Barreiros, who had been out of business for several years, applied with his own modern diesel engine design at a competition in Cuba , which he won under the supervision of the British Lloyd's Register .