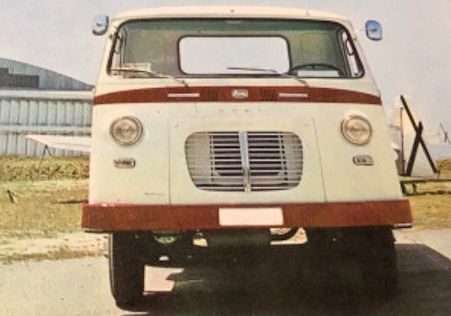 Avia was the brand name under which the commercial vehicles built by Aeronáutica Industrial S.A. (AISA) a company that was founded in Madrid in 1956,  later started to manufacture their own new light vans and FC pickup trucks. Taken over in 1970 by  manufacturer EBRO Motor Iberica.

In 1923, Jorge Loring Martínez created the Talleres J. Loring company in Carabanchel Alto ( Madrid ) for the manufacture of aeronautical material. In 1934 it became a public limited company, renamed Aeronautica Industrial SA (AISA) ,  In 1957 , taking advantage of the boom in the production of two-, three and four wheel commercial vehicle production that will carry the brand name AVIA, begins by creating a section dedicated to the construction of motorcars, with one capital of 42 million pesetas without ever leaving the aviation branch.

The first commercial vehicle was the Avia 200 motorcar , which was equipped with the Hispano Villiers engine of 197 cc of 8.4 HP, hydraulic rear brakes and up to 500 kg of cargo capacity. It was in production until 1963 in many versions.In 1960 he presented the prototype of his first light truck at the Barcelona Trade Fair : the Avia 2500, which went into production in 1961 with a 61 HP Perkins engine. For this project AISA counted on the advice of the Technical Department of ENASA-Pegaso.

In the middle of the seventies, without leaving the construction of trucks, the interest of AISA is focused on the improvement of its buses, reaching the construction of 40 seats. For it is associated with Iberian Motor , manufacturer of commercial vehicles Ebro , its main competitor and gradually was becoming a mere second mark of Ebro. When Nissan Motors bought Iberian Motor in the 80s, the Avia brand disappeared .

One of the most interesting applications of the Avia trucks was the Avia-Deutz fire truck manufactured by the Spanish subsidiary of Klöckner Humbolt Deutz . Based on an Avia 3500L chassis, it had a Deutz air-cooled engine and Magirus fire-fighting equipment .

The interest aroused in 1962 by the Avia 3500 and, later, the 6500, which bore the Perkins engine, led the company to manufacture more comfortable and more capable coaches. There is a second European brand called Avia Trucks , with Cummins engine , belonging to the Hinduja Group . In Spain, the commercialization is carried out through Avia-Trucks Ibérica .

The Spanish Avia should not be confused with the Czech Avia aircraft and automotive brand of the very same trade mark.