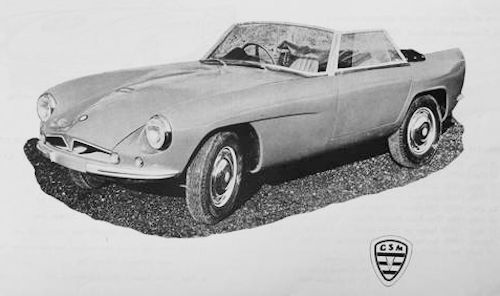 Glass Sports Motor Co. was a South African automaker from the late 1950s to the mid 1960s .The brand name was GSM .

The first model was the dart . Designer was Verster de Witt. A ladder frame formed the base Then, a two-seater open bodywork was fiberglass mounted. With some  coupes built also. Various four-cylinder engines from Ford , Coventry Climax and Alfa Romeo .

The subsidiary GSM Cars in the English West Malling made this model from 1960 to 1961 as GSM Delta .In the 1990s, Dart Engineering produced a replica of the Dart.

In 1962, the flamingo  was a coupe with a hatchback and two-part rear window, also designed by de Witt.  First, engines from Ford Taunus 1700 cc vehicles to later an engine from the Ford Cortina 1500 cc.