The third generation Superb, (using the MQB platform), was announced in February 2015 in time for the Geneva Motor Show, with volume production intended to start in the middle of the year.

The new model is larger than the second generation. The Škoda Superb appeared in the Tour de France as a Referee car.

The new generation of direct injection turbocharged engines consisting of four cylinder units, was to include five petrol engines ranging in size from 1.4 to 2.0 litres, and three diesels of 1.6 or 2.0 litres. The Škoda Superb 2.0 TSI 4x4 206 kW is currently Škoda's fastest production car, with a top speed of 250 km/h and acceleration of 0–100 km/h in 5.8 seconds.

Dealer deliveries of the liftback began in June 2015, with the estate wagon followed in September. 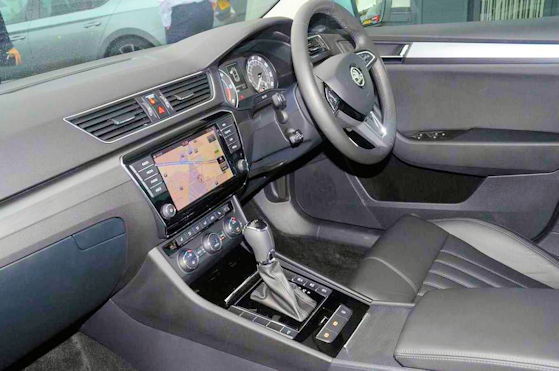 The Superb received very positive reviews in all foreign tests. British newspaper The Telegraph rated the new Superb with an overall rating of 9/10, Autocar 4/5, Top Gear 8/10, Auto Express 5/5, and in the Germanmagazine Auto Bild, the Superb received 588 points. The Superb has also scored highly in Australia, where Car Advice awarded an overall rating of 9/10 highlighting key areas of value for money, features, performance and cabin space where the car has excelled. The Superb also defeated its rivals, in AutoBild test the Mercedes-Benz E-Class (E220 CDI) and in Auto Express the Volkswagen Passat 2.0 TDI.

The Škoda Superb was also awarded the title of Car of the Year in the Czech Republic and in Macedonia.

It also became the 2016 World Car of the Year finalist, the best compact executive car and estate car in 2016 on What Car? (the United Kingdom’s leading car buying website) and the Auto Express Family Car of the Year 2016.