The second generation Fabia (internal type code 5J) was officially presented at the Geneva Auto Show in March 2007 and was sold from April 2007. It still uses the PQ24 platform. The car is however slightly larger than its predecessor and takes styling cues from the Roomster, Škoda's small MPV. The exterior of the two cars, Roomster and Fabia, were designed simultaneously to create synergies by Thomas Ingenlath and Peter Wouda.

The estate variant was officially announced in August 2007 and was introduced at the Frankfurt Motor Show in September 2007.Compared with the first generation the new Combi is 7 mm (0.3 in) longer, 46 mm (1.8 in) higher and the boot has grown by 54 litres (to 480 litres total). The engine portfolio is the same as the hatchback version, without the 1.2 44 kW one.

The initial petrol engine line-up was a mixture of newer engines from Audi and some carry-overs from the outgoing model. In comparison to the 1st-generation Fabia, both basic 1.2-litre 3-cylinders gained 4 kW each: new power peak was 44 kW (60 PS), and 51 kW (70 PS). There was only a single 1.4-litre 16v petrol on this model, producing 63 kW (86 PS). The range-topping petrol engine was the 1.6-litre 4-cylinder with variable valve timing producing 77 kW (105 PS) . There was also an option to mate this engine with a 6-speed tiptronic transmission sourced from Aisin.

Though the sedan body, and the RS version were discontinued (the latter until facelift in 2010), the 2nd-generation Fabia offered variety of new choices. The GreenLine model was the most environmentally-friendly Fabia, with 59 kW 1.4-litre diesel 3-cylinder consuming 4.1 l/100 km, which is 109 g of CO2 per km. At the Frankfurt International Motor Show (IAA) 2007 Škoda presented near-production-state design study of the Fabia Scout: a rugged version of the Fabia Combi. However, it was until May 2009 when this car finally started to roll off the production line in Mladá Boleslav. The new-generation Fabia featured a specific design element: a roof in different colour than the rest of the body was available as an option. 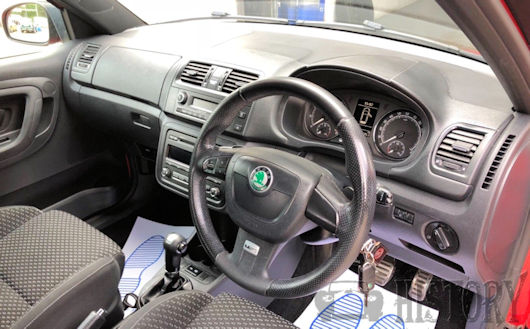 The facelifted Fabia and Fabia Combi were premiered at the 2010 Geneva Motor Show. Updated version can be easily distinguished by different shape of front bumper and front fog lights. Inside, new steering wheels were the tell-tales. Though their shape remained the same, headlights with projector module undergone technical changes: for full beam, a separate reflector is fitted on the inner side of the lamp, while the projector module providing a dimmed beam is on the outer side.

The engine line-up was updated along with a facelift, too. 1.2-litre TSIturbocharged petrol engines came as a replacement of the previous 1.4 and 1.6-litre MPI engines, providing significant improvements to fuel consumption and corresponding reductions in CO2 emissions. The Aisin automatic transmission previously used was also replaced with the 7-speed DSG dual-clutch gearbox (optional on 77 kW (105 PS; 103 hp) 1.2 TSI models), providing a reduction of over 30% in CO2 emissions for the 77 kW (105 PS; 103 hp) automatic derivative (compared to the previous 1.6-litre). Diesel engines were updated to the common rail system and four-valve technology.

With the facelift a sports RS version returned to the range, now available as both hatchback and estate. This model features the same 1.4-litre twin-charged petrol engine as the Volkswagen Polo Mk5 GTI, producing 132 kW (180 PS) and is mated with a 7-speed DSG dual-clutch transmission as standard. With top speed 226 km/h (Fabia Combi RS), this is the fastest production Fabia ever. The RS had its own version of the cake advertisement – ‚Mean Green‘, with a darker rock version of "My Favorite Things".

New to the lot was Monte Carlo version for both Fabia and Fabia Combi, utilising design features if the Škoda Fabia Sports Design Concept presented at 2009 Geneva Motor Show.

For the launch of the new Fabia, Škoda UK commissioned an advertising campaign called Cake, featuring the making of a Fabia car out of cake which swapped rivets for raisins, metal for marzipan and spark plugs for sugar.

Shanghai Volkswagen Automotive introduced the new Fabia to the public at the 2008 Guangzhou Motor Show. It was launched in China for the 2009 model year.

Škoda India launched the latest version of Fabia in 2008. The car was well praised by Indian motor magazines, but it couldn't live up to the hype created by the previous generation Octavia. Fabia has not succeeded in this market due to dealer problems, steep prices and Škoda trying to position itself as a luxury marque. Škoda India has decided to bring in more powerful engines at better prices and taken strict measures to improve dealer quality levels and curb excessive service costs.

The initial petrol engine lineup was a mixture of newer engines from Audi and some carry overs from the outgoing model. The base 1.2 remains the same (44 kW) while the higher powered version has its power output upped to 70 PS (51 kW). There was only a single 1.4 litre 16v petrol on this model, producing 85 PS (63 kW). The range topping petrol engine was the 1.6 16v engine producing 105 PS (77 kW) . There was also an option to link this engine to a six speed tiptronic transmission sourced from Aisin.

The top-of-the-line RS model features the same 1.4 litre engine as the Volkswagen Polo Mk5 GTI, producing 180 PS (132 kW) and is fitted with a seven-speed DSG semi automatic transmission as standard. The RS had its own version of the cake advertisement, with a darker rock version of "My Favorite Things".

The Motorsport division of Škoda AUTO builds Škoda Fabia Super 2000 rally car. Since its debut in 2009, the Fabia Super 2000 won 14 international titles and 22 national championships. Lars Larsson won the FIA European Rallycross Championship in 2007. Sergey Zagumennov did the same in 2014

C-pillars, necessitating wider B-pillars and stiffened side panels to retain structural strength. The Funstar is powered by a 1,2 litre TSI petrol engine, paired with a 7-speed dual-clutch transmission. A 1,8 litre engine was originally planned for use but could not be implemented due to its size. 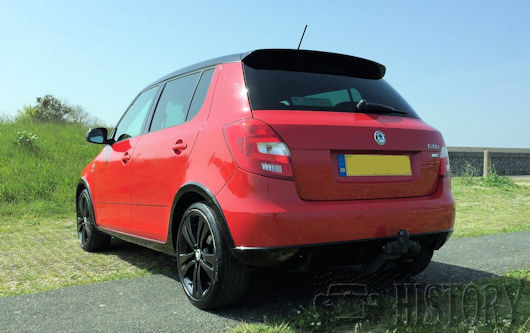