The Škoda Roomster (Type 5J) is a MPV-styled leisure activity vehicle, produced by the Czech automakerŠkoda Auto. It was revealed as a production model in March 2006 at the Geneva Auto Show, with sales beginning in June 2006. It was built at the Škoda factory in Kvasiny, Rychnov nad Kněžnou District.

A five door two seat panel van version, named the Škoda Praktik, was launched in March 2007. There was speculation that production would end in 2014, and on 30 April 2015, the last Roomster rolled off the production line in Kvasiny. Decreased demand could be blamed on the Yeti.

The model was never sold in the United Kingdom in RHD.

The Roomster is based on the concept car of the same name, originally revealed in September 2003 at the Frankfurt Auto Show. The concept was slightly shorter – 4,055 mm (159.6 in) against 4,205 mm (165.6 in) – than the production model but has a longer wheelbase – 2,710 mm (106.7 in) against 2,617 mm (103.0 in), and featured a single rear sliding door on the passenger side, which was replaced by two conventionally hinged swinging rear doors. Like the production car it was designed by Thomas Ingenlath and Peter Wouda.

The production Roomster (premiered at Geneva 2006 Motor Show) is Škoda's first car since the Volkswagen Group's take over of the brand that is not based entirely on an existing Volkswagen Group platform – although it is fundamentally based on the A4 (PQ34) platform, but with some unique additions. It shares components with the first generation Škoda Octavia and the second generation Škoda Fabia.

The name is reportedly a conscious combination of the words 'Room' and 'Roadster', and the split personality theme is played out in the design with a carefully honed 'Driving Room' ahead of the B pillars, and a generous 'Living Room' to the rear. The front ‘Driving Room‘ is tailor made to comply with the driver's requirements for a sporty cockpit.

The rear ‘Living Room‘ is aimed at creating roomy ambience with so called ‘Cinema Effect‘ with higher seating and lowered edge of windows. Škoda conceived the Roomster's cabin in a way it can have different configurations at the choice of the user.

The 'VarioFlex' rear seat arrangement can be folded in a 40–20–40 split configuration, instead of the more usual 40–60, and can also be moved longitudinally and transversally (by removing the middle seat). The rear seats also have variable inclination up to 7° to the back, or completely to the frontAiry ambiance in the interior could be enhanced by optional one piece panoramic sunroof.

The luggage compartment can have a completely flat surface with the rear seats completely removed, and the surface's height can also be modified with an amplitude of 250 mm (9.8 in). With the rear seats removed, the Roomster's luggage compartment has enough room to carry a bicycle.The Roomster therefore competes both in the mini MPV and leisure activity vehicle markets, which it will be sharing with the FIAT Idea, Nissan Note, Opel Meriva, Citroën C3 Picasso and Volkswagen Golf Plus.

The Roomster was available with different colour for the roof. Customers could combine standard body colours (both solid and metallic) with white, black, and silver roof. The same concept was used for the hatchback Fabia, too. Rugged version of the Roomster – the Scout, was launched in 2007. 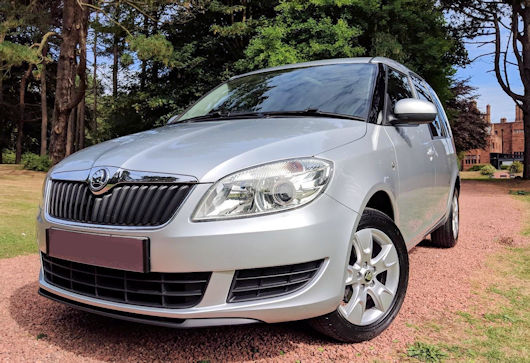 The facelifted Roomster was premiered at the 2010 Geneva Motor Show, together with the Fabia models. Updated version can be easily distinguished by different shape of front bumper and front fog lights. Inside, new steering wheels were the tell-tales. Though their shape remained the same, headlights with projector module undergone technical changes: for full beam, a separate reflector is fitted on the inner side of the lamp, while the projector module providing a dimmed beam is on the outer side.

The engine line up was updated along with a facelift, too. 1.2 litre TSI turbocharged petrol engines came as a replacement of the previous 1.4 and 1.6 litre MPI engines, providing significant improvements to fuel consumption and corresponding reductions in CO2 emissions.

The Aisin automatic transmission previously used was also replaced with the seven speed DSG dual-clutch gearbox (optional on 77 kilowatts (105 PS; 103 bhp) 1.2 TSi models), providing a reduction of over 30% in CO2 emissions for the 77 kilowatts (105 PS; 103 bhp) automatic derivative (compared to the previous 1.6 litre). Diesel engines were updated to the common rail system and four valve technology. 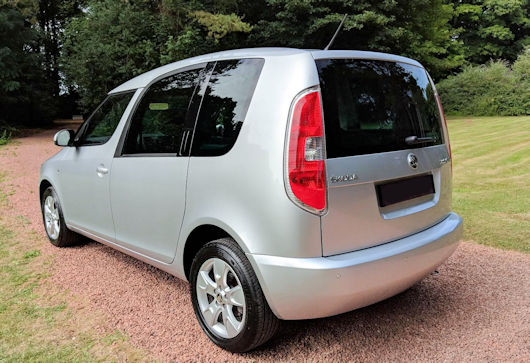