The Škoda 130, Škoda 135 and Škoda 136 are three variations of a rear-engined, rear-wheel drive small family car that was produced by Czechoslovakian car manufacturer AZNP in Mladá Boleslav, Czechoslovakia between 1984 and 1990. The Škoda 130 is known internally as Type 742, and the Škoda 135/136 as Type 746. They were developed from the Škoda 105/120 series.

The very first Škoda 130 models were introduced in August 1984, shortly after the earlier Škoda 105/120models were given a mild revamp. Developed from the earlier Škoda 105/120 models (some of which continued in production alongside the Škoda 130 models), the 130 series used a new 1289 cc engine (which produced 58 PS (43 kW), and which was just an enlarged version of the 1174 cc engine used in the 120 series). The 130/135/136 series also had a five-speed gearbox, semi-trailing arm rear suspension, wider track and four-pot front brake disc calipers (the latter two of which were already in use in the 105/120 series).

The Saloon versions of the new 130 series were available in 130 L and 130 GL forms and the Coupè model was the 130 Rapid, which (with the exception of their mechanical specification) were broadly identical to the smaller-engined 120 LS and GLS Saloons and 120 Rapid Coupé.

The introduction of the more technically innovated Škoda 130 series might have been a reasonably great success for Škoda, but the basic engineering design dated back to the 1960s, and was therefore extremely outdated by the 1980s.

The final models to evolve from the rear-engined Škoda generation were the Škoda 135/136 series, introduced in April 1987. The new models (which were available in exactly the same model forms as the earlier 130 series) had an uprated 1289 cm3 engine with an eight-port aluminum cylinder head (this was the same engine that was also used in the Škoda Favorit), with an output of 58 PS (43 kW) for the 135 models, and a higher output of 62 PS (46 kW) for the 136 models (which had a higher compression ratio than the 135 models). These new models also had a new front grille (which was also fitted to the remaining models of the 105/120 series). Inside, the only change was a new instrument panel.

The Rapid coupe versions of the 130, 135 and 136 series were renowned as being the only cars which handled like the notoriously enjoyable yet temperamental Porsche 911 of the same era.

The rear-engined Škodas continued in production until 1990, when the very last ones left the Škoda factories in Kvasiny and Mladá Boleslav.

The  Skoda Estelle was an unlikely hero of the Rallying world in the '70s and '80s. The Škoda Motorsport works team won their class a staggering 17 years in a row on the RAC (Around Britain) Rally. John Haugland was the inspirational Norwegian rally driver responsible for Škoda's success. 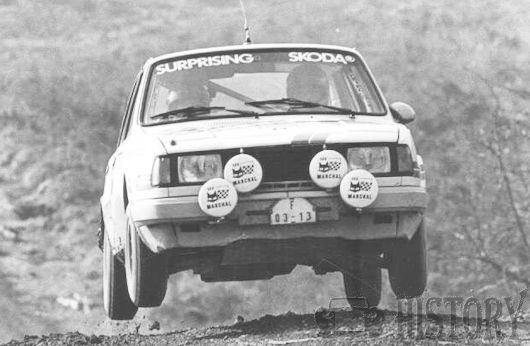 The 130 models made their UK debut in March 1985 and were available in both Estelle 130 L and 130 LSE 4-door saloon and 130 Rapid 2-door Coupé forms, with an aftermarket Cabriolet version of the Rapid also available. The Estelle 130 GL, which was available in Eastern Europe from August 1986, arrived in the UK market in May 1987. The UK market got the 136 Rapid Coupé and Cabriolet models in August 1988, followed by the rare fuel-injected Rapid 135 RiC Coupé in December 1989. Both these, and the Estelle 120 L and 120 L Five Saloons, were discontinued just four months later. The Estelle and Rapid were very competitive cars, which helped Skoda to new sales records in Western Europe in the late 1980s (about 17,000 105/120/130 models were sold in the UK in 1987 alone).

The new 130 models silenced the earlier criticism that had been made in some quarters of tail-happy handling, with the prominent UK motoring magazine "Autocar and Motor" remarking in 1988 that the new 136 Rapid model "handles like a Porsche 911" in that the rear-engine design encouraged oversteer. 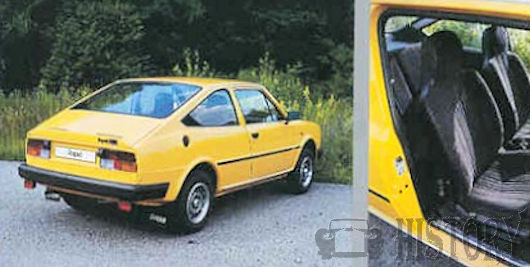