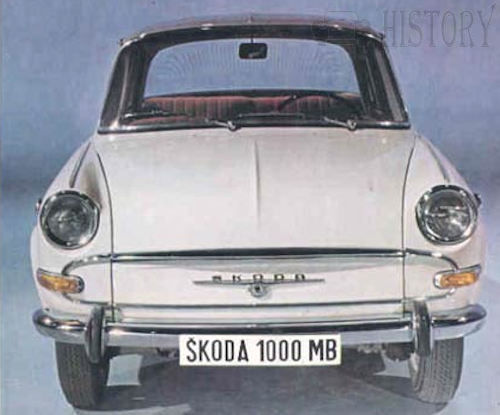 In 1955, the same year in which the Škoda 440/445 made its first appearance, Škoda started making plans for a new car for the 1960s. The initial plans for the car were to make the car as light and fuel-efficient as possible: it was to weigh no more than 700 kg, and the overall fuel consumption was not to exceed 6-7 litres per 100 kilometres (33-38mpg).

The front-engined-with-front-wheel-drive option was unsuccessful due higher cost and design complexity, and therefore Škoda opted for the rear-engined-with-rear-wheel-drive format. Even by the early 1960s, the idea of rear-engined small family saloons was still considered to be reasonably popular. In France, there were the Renault Dauphine, Renault 8 and Simca 1000, while in Germany there were the Volkswagen Beetle and NSU Prinz, in Italy there were the Fiats 500 and 600, and in Britain there was the Hillman Imp, all of which employed the rear-engined concept.

A new era for Škoda

The Škoda 1000 MB (the letters ‘MB’ coming from the initials of Mladá Boleslav) made its debut in April 1964, as the successor for the Škoda Octavia. This was just the beginning of what was to eventually evolve into a long line of rear-engined Škodas. The engine that powered the 1000 MB was a 988cc (1-litre), 4-cylinder, overhead valve (OHV) unit that produced 44 bhp (33 kW). It was water-cooled, with (most interestingly) an aluminum cylinder block and cast iron cylinder head. The 1000 MB had a four-speed manual all-synchromesh gearbox, all-round independent suspension, swing axle rear suspension, and drum brakes at the front and rear.

The 1000 MB was a stylish four-door saloon (measuring 13 feet 8 inches in length and 5 feet 4 inches in width, with a wheelbase of 7 feet 10 inches), which featured a steeply sloping nose that was flanked by rounded front wings (not unlike the Ford Anglia 105E of the time). Being a rear-engined car, the 1000 MB’s radiator and (engine-driven) cooling fan were situated in the rear engine compartment, so therefore a series of slats were cut into each rear wing and the rear panel to increase the flow rate of air in order to assist in keeping the engine cool. Apart from the use of cooling vents in the rear wings and rear panel, everything else about the 1000 MB’s styling was normal, which was undoubtedly in an attempt to appeal to all the conservative-minded buyers in export countries like the UK. This car was highly successful both for Škoda and the Czech economy.

By early 1965, the British were starting to receive the 1000 MB, which was being priced at a reasonable £579, which worked out cheaper than similarly-sized four-door saloons like the Ford Cortina 1200 (at £592) and the Hillman Minx Deluxe (at £636). Despite being affordably priced, the 1000 MB was well equipped, with reclining front seats, a heater and demister, full tool kit, and a generously sized boot up front as well as a useful storage area behind the split/folding rear seat. Many salesman rightly stated over the years that the 1000 MB was “a lot of car for the money.”

By the late 1960s, Škoda felt it was time for an update of the ‘MB series, which they did with the introduction of the Škoda 100 and Škoda 110 in August 1969. By the time it was updated, a total of 443,141 ‘MBs were built. The ‘MBX series was produced in very limited numbers (2,517 in total) and is therefore an extreme rarity these days. 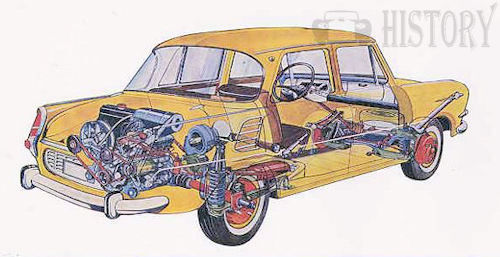