Singer, who had been Britain's fourth-largest car manufacturer at the end of the 1920s, hit financial trouble in the 1930s and struggled to stay in business. Nevertheless, they built some fine sports cars in the period, Their 'Nine' sports model, however, which was announced in 1939, was by no means as fast or as specialised as the earlier models, mainly because it was much more bulky, with four seats.

This model, which barely got into its stride before the outbreak of war, was reintroduced in 1946 without change. The chassis of the Nine was undistinguished and its styling was frankly traditional, but the engine was a nicely detailed single overhead camshaft unit which was also used by HRG for one version of their own product. In its original form this car had a simple channel-section frame with beam front and rear axles, and its maximum speed was limited to about 69mph. The mechanical layout was like that of the Singer Nine saloons, except that the Roadster had only three forward gears and used rod-operated brakes. In the early postwar years sales were almost entirely for export, and something like 2500 were built.
At the end of the life of this car, it was revised to become two rather different the Type 4A of 1950/1951, which had a four-speed gearbox, and the Type models 4AB, built alongside it, which had a new chassis frame with coil spring independent a layout related to that of the contemporary Singer SM1500 front suspension saloon.

As with the MG TC, however, the buying public had had enough of a backward looking (and backward-engineered) sports car, and the Nine therefore gave way to the SM Roadster in 1951.

Note: From autumn 1950, a new chassis with independent front suspension, by coil springs, wishbones, and anti-roll bar, was made available, for the 4AB mould. 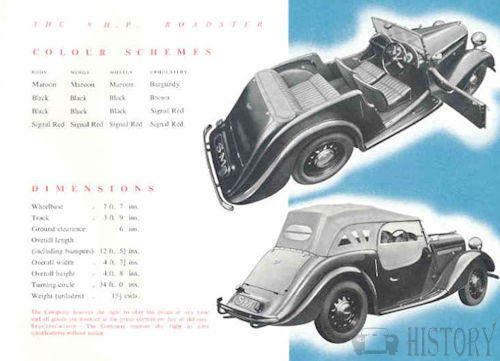