The Simca Abarth 1150 is a series of sports cars made by the Italian manufacturer Abarth on behalf of Simca .

The Simca 1000 is actually the result of the project "Fiat 122", the one that was to be the replacement of the Fiat 600 but which was not accepted by the general management of Fiat who preferred the project "100G" which would become the Fiat 850 . During a visit to Turin by Henri Théodore Pigozzi , boss of Simca, then a subsidiary of Fiat , in 1957 , he was seduced by this study and obtained to recover the project to achieve it in France.

The body designed in Turin by Mario Revelli de Beaumont , famous Italian designer and sees his engine at the rear by the classic design that Fiat has developed with its new Fiat 600 and 850. It is a "very back "with a four-wheel independent suspension (helical springs at the rear and blades in front) and a motor cylinder four longitudinal cantilever rear box with a four-speed synchromesh . It was also the last car to receive the contribution of the Fiat design office for its design very inspired by the Fiat 850 .

It was therefore not very difficult for Abarth engineers to work for an upgrade of the car in its sports version. It was during the summer of 1962 and Simca Abarth sign this cooperation agreement, especially as the main competitor of Simca, Renault, had just launched in June its new R8 Gordini and his partner had to study a sporty version. 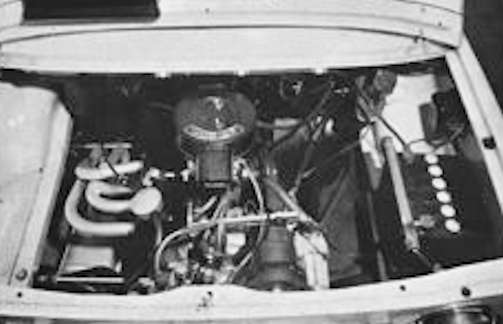 The model was different from the basic model with its grille adorned with a red banner supporting the shield Abarth, the rims were perforated to better ventilate the brakes and included hubcaps bearing the Abarth logo. The interior layout was identical to the basic model but as an option we could have a more refined and complete dashboard signed Abarth.

All Simca Abarth 1150 models have the same engine with 1,137  cc but each model offers different powers depending on the compression ratio with additional radiators: