The Simca Vedette is a six-seater sedan of the French automaker Simca . After Simca had taken over in 1954 the French Ford subsidiary Ford Société Anonyme France ( Ford SAF ) with the car factory Poissy near Paris, the still developed by Ford successor of the Ford Vedette was built until 1961. In some export markets such as the Netherlands and Germany , the new Vedette was still marketed as Ford.

The "Aquilon" eight-cylinder V-engine with 2351 cc displacement (bore 66.06 mm, stroke 85.72 mm) was essentially derived from its predecessor. It was a 1930s design with a triple crankshaft and stationary valves operated by a central camshaft. The exhaust ports were passed through the engine block between the cylinders. This resulted in a high cooling load. The engine delivered up to 84 hp (62 kW) at 4800 rpm, the maximum torque was 152 Nm at 2750 rpm. The mixture prepared a downdraft double carburetor. The power was transmitted via a partially synchronized three-speed gearbox and an undivided propshaft to the rear wheels. The rigid banjo axiswas guided on leaf springs and had telescopic shock absorbers. The front wheels with roller steering were suspended individually on MacPherson struts with wishbones and stabilizer (Simca called "Stabimatic"). On all wheels there were hydraulically operated drum brakes, rear self-centering, front duplex brakes ("Twinplex") . The body was new, self-supporting and designed in the style of the time with tail fins. Often the Vedettes are called instead of the official name Simca Vedette Trianon , Simca Vedette Versailles, Simca Vedette Régence and Simca Vedette Marly only asSimca Trianon , Simca Versailles, Simca Régence and Simca Marly .

In 1957 the Vedette was revised. The car received larger tail fins and further projecting headlamp edges, the engine power was increased slightly to 84 hp (62 kW). The car was also exported to the USA and sold there as Chrysler .

The old body was further developed with simple equipment and the 1.3-liter engine of the Aronde and sold as Simca Ariane . From October 1957 Ariane 8 was also available with the V-8 engine.

Over the seven years of production under Simca 166985 Vedettes were produced .On February 9, 1961, the last built in France Vedette left the plant in Poissy.

In 1961 Simca shifted the production of Vedette to Belo Horizonte in Brazil . There were running until 1969 Vedettes with more powerful engines (most recently as Chrysler Esplanada with modernized bodies) off the line. In Australia , Chrysler built the Vedette between 1958 and 1962.The Simca Vedette served as a model for the Chinese sedan Dongfeng CA71 . 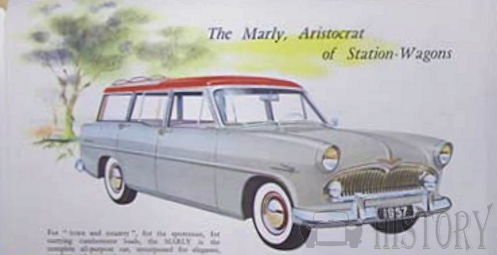