The Simca 6 is a further development of the French - Italian small car Simca 5 , which Fiat designed and built the Simca only from 1948 to 1950.

Shortly after the Second World War , Fiat introduced the Topolino B. While the Simca 5 and Fiat Topolino A models are broadly similar, the Simca design office in Nanterre proved for the first time in its history its independence from the Fiat motherhouse in Turin in the construction of the Simca 6. The Italian parent company had its headquarters in March 1948 Geneva Motor Show released version B of its famous Topolino. There were no major changes from version A; they wanted to test the public taste before replacing this familiar model.

The Simca 6 was derived directly from the Simca 5 and anticipated the characteristics of the future Fiat Topolino C, which was retained as a precautionary measure. The changes were: Americanized front with an enlarged but lower grille and headlamps integrated into the front fenders, such as the Peugeot 203 or the Renault 4CV.Extended rear of the vehicle with a small trunk, which was accessible only from the inside and took the spare wheel almost completely.An engine ( the Fiat 500 Topolino B ), whose power at the same displacement of 569 cc now instead of 8.8 kW (12 hp) was 12 kW (16.5 hp) and whose valves now hung in the cylinder head. The station wagon with 250 kg payload received its type approval in 1949 and replaced the station wagon of the Simca 5.

The cars were equipped with the new engines of the Fiat Topolino B with OHV valve control, which gave a power of 12 kW (16.5 hp) with the same displacement. He had a new chassis with extended rear end, which could accommodate two semi-elliptic leaf spring packages and wheels with larger diameter. The new body corresponded to the zeitgeschmack with a trunk, which took up the spare tire and the gas tank. The French model was presented more than 17 months before the Italian called "Topolino C". The Topolino C was enormously successful, was presented to the Geneva Motor Show in March 1949 and manufactured from 1949 to 1955 in 376,371 copies. 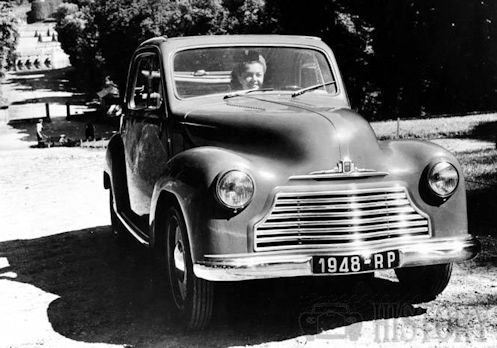