The Simca 5 is a French - Italian small car that Fiat designed and built the Fiat and Simca from 1936 to 1949. It was launched in Italy as the Fiat 500 Topolino A.

It is said that the first idea for this small car came from the Italian fascist leader Benito Mussolini, who was then in power. In 1930, the "Duce" had summoned Italian senate Giovanni Agnelli , founder of FIAT, to inform him of the "urgent need" of Italian motorization with an economic car whose price should not exceed 5000 liters .

This idea had such an effect and served the propaganda of the fascist party so well that Adolf Hitler , just appointed German Chancellor, made her his and called Ferdinand Porsche to him and instructed him to realize a car whose price was not 1000 RM should exceed. For example, the Fiat 500 Topolino in Italy and the Volkswagen Beetle in Germany are said to have originated.

In midsummer 1931, the prototype of the new Fiat 500 with front-wheel drive was ready for the first test drive. The test driver was the designer, Senator Agnelli, impatient to prove the qualities of the vehicle and telegraph the news to the "Duce". The car left the factory in Lingotto , drove quietly a few miles, but at the ramp to Cavoretto forced a beginning engine fire all inmates immediately to get out. The reason for the incident was a small hole in the carburettor, but Senator Agnelli decided that Fiat should never again try to build a front-wheel drive car. Engineer Lardone , the project manager, was fired on the spot.

Dante Giacosa took over the management of the project several months later. He presented a new car that followed the principle of the Fiat 508 , but with reduced dimensions. The new project was approved by the management and the first prototype was tested and presented on October 7, 1934 in Turin . He reached a top speed of 82 km / h on the highway between Turin and Milan . The political situation of the time, the Directorate of Fiat the car only on June 10, 1936 the "Duce" to introduce, but the production had begun long before. The plans and pre-production copies were sent to France to set up the production of the Simca 5, the French clone.

The Simca 5 (Fiat 500 Topolino A) is a small car with 2 seats "for less than 10,000 francs" (9900 francs ), designed by the Fiat engineers in Turin before the Second World War .It was first presented at the first Simca factory in Nanterre on March 10, 1936, three months before the Italian version. this was built in 46,472 copies with 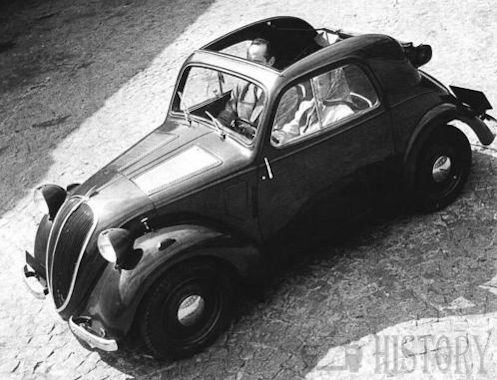