The Simca Aronde , initially referred to as Simca 9 Aronde , was a mid-size vehicle that was manufactured by the French automaker Simca from 1951 to 1964. The car was the first independent model of Simca, since the models previously licensed products of the Italian manufacturer Fiat were - the Simca 5/6 was a replica of the Fiat 500 Topolino and the Simca 8 of the Fiat 1100  After the Second World War , the development of a successor of the Fiat 1100 delayed, he was less important for Fiat than the laterFiat 1400 and the Fiat Topolino . Simca therefore developed its own model, only the engine was taken over. The four-cylinder in-line engine with 1.2 l displacement (bore: 72 mm, stroke: 75 mm) had a triple-mounted crankshaft , side camshaft and overhead valves. He made 45 hp (33 kW) at 4600 / min and gave a maximum torque of 85 Nm at a speed of 2700 / min. About a single-disc dry clutch, a fully synchronized four-speed gearbox with steering wheel circuit , one-piece propshaftand a hypoid-toothed final drive, the power was transmitted to the rear wheels. The chassis consisted of double wishbones front with coil springs and anti-roll bar, a worm gear and rear of a rigid axle on leaf springs and hydraulically operated drum brakes on all wheels. Like the larger Fiat 1400, the Aronde had a self-supporting body and a subframe in front.

"Aronde" is an old French term for " Schwalbe ". This term was used because the swallow also graced the Simca logo of that time.

Altogether there were three generations of the Aronde, of which a total of 1.4 million copies were produced. This Simca became the second largest French car manufacturer in the 1950s. 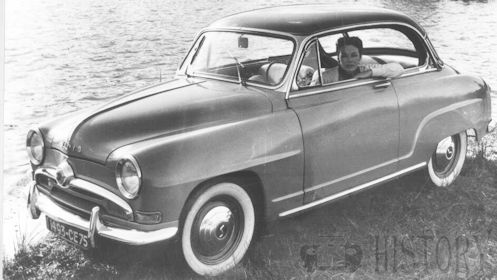 The model Simca 9 Aronde was manufactured from 1951 to 1955. The Aronde was a modern vehicle with self-supporting body . The engine used was the 1221 cc petrol engine from the Simca 8 . There was a four-door sedan , a three-door station wagon and a two-door coupe , which like other coupes by Simca was initially manufactured by Facel . Later, this coupe was replaced by a body based on the sedan and was called Grand Large .

The second generation, the model Simca Aronde (Type 90A), came on the market in October 1955. It was a facelift with a modified front and rear view, but got a completely new engine: 1290 cc Flash .

There were the equipment variants Elysée and Montlhéry (named after the racetrack in Montlhéry ). In October 1957, there were two other variants - the Océane , a two-door convertible , and the Plein Ciel , a hardtop coupe; both made again at Facel.

In September 1958, a redesigned sedan, the model Simca Aronde (type P60) was presented. The station wagon received only a new front, but was still the predecessor model. A new Coupé Monaco was presented, as well as a lower priced entry-level Etoile , which replaced the variant Elysée and had only a 1090 cc engine.

From October 1960, a new engine ( called Rush ) was used with 1.3 liters and a five-bearing crankshaft. A 70-horsepower version ( Rush-Super ) was available from September 1961 in the sedan Montlhéry Spéciale and the coupe Monaco Spéciale .