The Simca 1307 was the name under which Chrysler Europe launched its new large family car in July 1975.

A modern, front-wheel drive hatchback, it was one of the first such cars in that class, along with the Volkswagen Passat, and became the 1976 European Car of the Year. It had been in development since 1972.

The model was sold under a variety of names, including Simca 1308 and 1309 models (with larger engines), Chrysler Alpine (name used for the Irish, UK and New Zealand markets), Chrysler 150 (Spanish market), Talbot 1510 / Talbot Alpine / Talbot 150 (a facelifted version launched by PSA after its takeover of Chrysler Europe) and Talbot Solara (the saloon version).

More upmarket models were designated 1308 (1508 in some markets) and 1309. All of the models replaced the Simca 1301/1501 range in France, while on the British market it was sold alongside the aging Hillman Hunter.

Styled by Roy Axe, the Simca 1307, along with the recently introduced Volkswagen Passat, was one of several full-size European family hatchback inspired by the Renault 16 that had defined the sector back in 1965. In the 1970s the most popular mid-size cars in Europe were still traditional sedans like Ford Taunus, Ford Cortina, Opel Ascona (Vauxhall Cavalier) and Peugeot 305. The car was originally manufactured in Poissy in France, in Ryton in the United Kingdom, from 1977 in Villaverde in Barreiros, subsidiary of Chrysler Europe in Spain, and assembled from CKD kits by Todd Motors (later Mitsubishi Motors NZ) in New Zealand between 1977 and about 1983. Between 1979 and 1985 the car was also built by Valmet Automotive in Uusikaupunki factory in Finland and assembled in Colombia as Dodge Alpine between 1978 and 1982 at the Chrysler Colmotores in Bogotá.

In 1980 the car, which was now sold under the Talbot-brand, received a facelift. The new model was known as the Talbot 1510 (the Talbot Alpine name was used in the UK). A saloon version, called the Talbot Solara, was released that year, and produced alongside the hatchback version.

In New Zealand, Chrysler, Talbot, Alpine and 1510 badges were used on the car during its lifetime, though it was officially in price lists as an Alpine, following the UK convention. In 1982 the car was facelifted and renamed SX there. 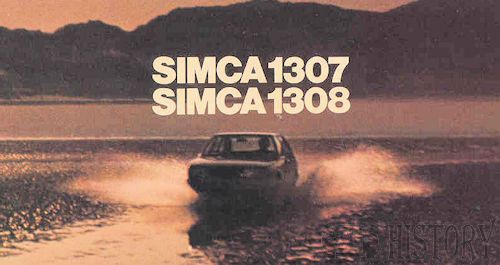 French manufacturing of 1510, Alpine and Solara, along with the smaller Horizon, ended in 1985. In the United Kingdom the last cars were rebadged as the Rapier and Minx which were badged depending on trim level rather than body style. The names were sourced from the corporate ancestor of Chrysler Europe, the Rootes Group, having been used on the Sunbeam Rapier and Hillman Minx. Supply of these models was limited and in 1986 production ceased, with the Talbot marque being shelved soon afterwards on all passenger vehicles.

Due to corrosion problems similar to those of the Horizon few Alpines have survived in the UK; according to the June 2009 issue of Practical Classics, only 15 remain in the country.