The new Seat Ibiza was presented on May 22, 2008 and based as the VW Polo V on the VW PQ25 / A05 platform. Since June 14, he is sold as a five- and three-door (SC, "Sport Coupé"), at the dealers. The internal name is Seat Ibiza 6J. was presented as a prototype at the Geneva Motor Show in 2007 with the name "Ibiza Bocanegra Concept" .The new model brought to production the stylistic features of the SEAT Tribu prototype , launching a new platform for the Volkswagen Group , which used the Polo V , the Fabia III and the Audi A1. It has 3 different bodies: the three-door version with the SC name "Ibiza Sport Coupé" (code 6J1), the family version is called Ibiza ST (code 6J8), and the classic 5-door version (code 6J5).

Since spring 2010, there is the "Bocanegra" package, which is available only for the three-door model variants FR and Cupra. Externally, the Seat Bocanegra ("black muzzle") stands out due to the black grille, the front bumper with integrated fog lights, specially shaped fenders, 17-inch alloy wheels in silver and the modified tail of the normal Ibiza. The name is a nod to the Spanish nickname of the introduced in 1975 Seat 1200 Sport Coupe .

Since July 2010, Ibiza has also offered a combined version called the Ibiza ST. It is about 18 cm longer than the five-door hatchback. According to Seat, this combination variant of the Ibiza is no longer produced since July 2016 and is therefore only available as a used or warehouse and preliminary model. Since early 2011, Ibiza is the Spanish market in the version Spotify offered one of the Reference -Grundausstattung similar version but with a Bluetooth - interface of the radio to iPhones and similar devices. Seat works with telephone providers on the Spanish market. For the first six months, a flat-rate use of Samsung Galaxy mini devices is offered free of charge via a provider . In addition to the Ibiza, there are also vehicles of other series with the Spotify equipment.On March 24, 2012, the revised Ibiza was presented at the Geneva Motor Show . He received a modified front with newly drawn headlights. The interior has also been modified: new fabrics, a modernized dashboard and an enlarged glove box."Sport" and "Cupra" versions temporarily dropped out of the program. There were only the equipment variants Reference, Style and FR. From early 2013, the Ibiza was also available again as a "Cupra" version.

At the Mondial de l'Automobile in Paris, Seat presented a modified Ibiza in autumn 2014, which was on sale from mid-2015.

The changes concerned mostly vehicle parts under the metal sheet, whereby also the internal type designation changed (now 6P). The facelift gave the Ibiza a new suspension with optional adjustment in two hardness levels via the "Sport button". When the sport mode is activated, steering, throttle response and sound (in the interior) of the vehicle also change. In addition, the Ibiza received the facelift, the new Seat brand logo. In the interior now higher quality materials were processed and the buyer, among other things by different color packs more customization allowed. Furthermore, the cockpit has been redesigned: new round instruments with larger multi-function display, a central, 6.5 "screen with a Seat Media System and navigation system with optional FullLink function, and a new multifunction steering wheel.

The Ibiza also received a revised engine range. The smallest available gasoline engine became a single-liter three-cylinder with 55 kW (75 hp), which was available in several stages of development. The 1.2 TSI, as well as the 1.4 TSI was replaced by the 1.0 ecoTSI with 70 kW (95 hp), or 81 kW (110 hp), which is also available with 7-speed DSG. The 1.4 TSI (ACT) FR was later also removed from the program, or was reserved for the big brother Leon.

The Ibiza is available in the equipment variants Reference, Style and FR. In September 2015, a new Cupra version was presented at the IAA. It was now be sold with a revised 1.8 TSI motor (192 hp) 141 kW.  The production of the estate version Seat Ibiza ST expired in July 2016, the 3-door model and with it the Cupra end of 2016.With finish: dark lenses, tire pressure sensor, hill start assist function, aluminum-coated brake and gas pedals, 17 "alloy wheels Barcino model, specific bumpers of the Cupra model with color of the bodywork, Cupra logo on the front and rear, central exhaust outlet in the form of a trapeze, electric and heated mirrors in black and with parking position, Cupra suspension, bixenon headlights with AFS and front and rear LED's , Cupra seats, side curtain airbag and SEAT Portable System.

At the end of January 2011 the new commercial generation of the Ibiza was presented, with the Reference finish; the cargo space has increased to 930 liters and equipped with 75 TDI 1.2 TDI engine.

In 2008, the SEAT Ibiza IV conducted crash tests of EuroNCAP and achieved an overall rating of 5 stars: 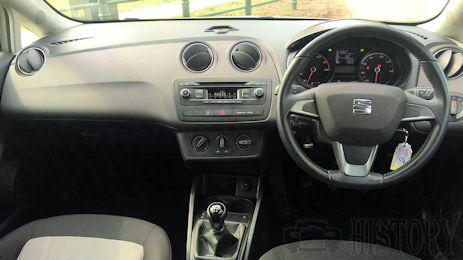 In 2012 (2013 for Mexico), the SEAT Ibiza was restyled (code 6P); the changes were mainly in the front optical groups, In addition, it included a new multimedia system called SEAT Portable System . This new version of the Ibiza arrived at the dealerships in the spring of 2012 with prices starting from 12,000 euros.At the Motor Show in Barcelona , in 2015, a small update is presented where it is renewed with new tires and the option of personalization in some details. The interior is renewed with a new multifunction screen for GPS, temperature control regulated by the air conditioner and with the appearance of a new finish called Connect , fruit of the agreement with Samsung , which provides connectivity improvements between the mobile device and the vehicle. Furthermore, for new engines they include standard Euro 6. 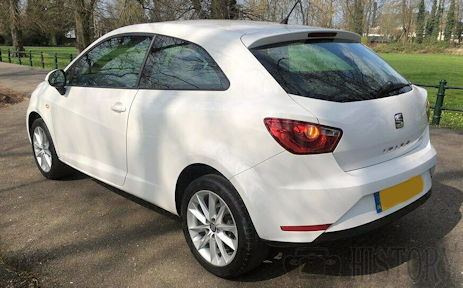