The Seat Altea is a passenger car model of the belonging to the Volkswagen Group Spanish car manufacturer Seat . This is a compact van on the platform PQ35 (A5) of the Volkswagen Group , which is also used for example for the VW Golf V , the VW Touran I , the Audi TT or the Škoda Octavia II . A special detail of the Altea are the windshield wipers , which face each other in opposite directions, which rest against the A-pillars in the rest position behind the panels .The production of the Altea was finished in 2015 with the edition of a Last Edition  without a successor model .

The Seat Altea was first presented to the public in 2003 as a prototype . At the European Motorshow 2003 in Brussels, the then SEAT Design Director, Walter de'Silva , received the Design Award of the Association of European Designers in the Concept Vehicles category for the Altea prototype. With the Altea, the future design characteristics of the Seat models were first presented to the public. This includes the distinctive front end with the lynx eyes and the large grille, which contains the Seat logo and is outlined in chrome. Also included are the side lines starting at the front spoiler and rising above the fenders, which is the concept SEAT - auto emociónto express. After the presentation of the production model at the Geneva Motor Show 2004, which corresponded largely to the concept car, the Seat Altea received the " red dot: best of the best " in the transport category for outstanding design quality. Like the name of other Seat models, the name refers to a Spanish city. Altea is located on the Costa Blanca about 50 km northeast of Alicante and has about 21,000 inhabitants

At the IAA 2005, a sporting version of the Altea called Altea FR was presented as a concept study. In February 2006, the production version came with a gasoline engine and 147 kW or a diesel engine with 125 kW on the market. The gasoline engine is a 2.0-liter turbocharged direct injection engine (TFSI) which is also used in the VW Golf GTI and Seat Leon FR . The 2.0-liter TDI engine is also used in the VW Golf GT . The external features of the FR are a twin exhaust with 70-millimeter tubes, 17-inch alloy wheels with 225/45 tires and optionally available bi- xenon headlamps and 18-inch alloy wheels.

A 18.7 cm extended version of the Altea called Altea XL was presented in September 2006 at the Mondial de l'Automobile . With gasoline engines between 75 kW (102 hp) and 118 kW (160 hp) and TDI diesel engines with direct injection from 77 kW (105 hp) to 125 kW (170 hp), it was introduced to the German market in November 2006 , Also the Altea XL benefited in the spring of 2009 fully from the visual and technical innovations in the context of the facelift.

The XL version based Freetrack was introduced as an SUV study in 2007. Like these, the production version, the first Sport Utility Vehicle from Seat, has a 4 cm increased ground clearance and four-wheel drive, but is also available with front-wheel drive. The engines used are a petrol engine with initially 147 kW, since 2009 155 kW and 125 kW diesel used. Subsequently, the diesel engines followed with 103 kW and 2010 with 77 kW. Outwardly, the Altea Freetrack differs by various attachments in off-road look.

Since spring 2009, the Altea is offered in all variants with slightly modified body parts (rear window extends to the edge of the tailgate, slightly modified tail lights, modified front bumper, higher exterior mirrors) and a revised interior. Thus, the dashboard has been redesigned and complemented by a white instrument lighting and a redesigned steering wheel and higher quality plastics.

The engine offer was changed. Among other things, the 2.0-liter naturally aspirated engine with 110 kW (150 hp) (last only available with automatic transmission) was taken out of the program and by the 1.8-liter turbo version ( TSI ) with 118 kW (160 hp) , optionally in conjunction with a direct shift gearbox (DSG), replaced. 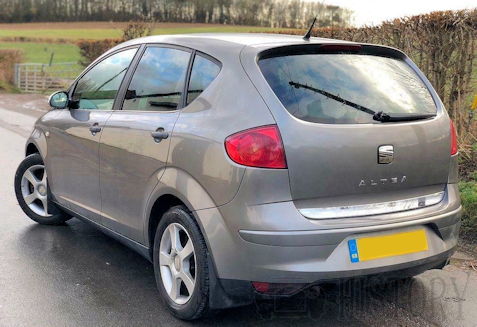