The Seat Tarraco is after the Seat Arona and the Seat Ateca, the third SUV of the Spanish car maker Seat . It is based on the modular transverse modular system MQB A + platform from the Volkswagen Group and is thus closely related to the VW Tiguan Allspace and the Škoda Kodiaq . Therefore, the SUV, which is also optionally available with seven seats, this is also in the Volkswagen Wolfsburg plant manufactured. The production model was presented on 18 September 2018.

The name of the vehicle is intended to commemorate Tarraco , the former capital of the Roman province of Tarraconensis . This corresponds to the ancient name of today's Catalan city ​​of Tarragona .

The name of the SUV was determined by a public vote. Everyone could suggest a name related to a Spanish city. In total, 10,130 suggestions from more than 130,000 people were received. After an examination based on linguistic and legal criteria, the names Alboran , Aranda , Avila and Tarraco were finally ready for a final vote. Originally, the name of the new SUV should be announced in October 2017, due to the independence referendum in Catalonia , Seat finally announced the name on February 19, 2018. Of more than 150,000 participants, more than 35 percent voted in favor of Tarraco .

The SEAT Tarraco is the second model of the brand to offer 7 seats, since the SEAT Alhambra was the only SEAT model to offer two optional seats. The interior of the Tarraco is spacious, its boot capacity is 1920 L although if the two seats are used options it is reduced to 750 L. On the other hand, it opens a new design language in SEAT, highlighting the front with a large front grille and new optics, and the return to an aesthetic bet already used by Giugiaro for SEAT at the beginning of the 90s; the unification of the rear lights telephone type, being influenced to the rest of the models of the brand from here on. 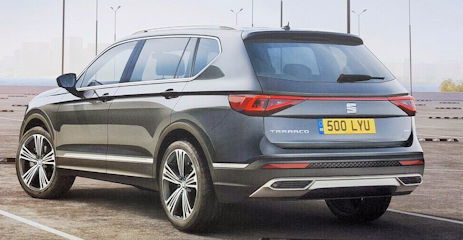