Seat Ibiza II (Type 6K) refers to the second generation of the small car Ibiza from Seat . The Ibiza (Type 6K) was introduced in early 1993.

While the technology now came exclusively from VW, was again responsible for the body shape Giorgetto Giugiaro. The drag coefficient of the Seat Ibiza is 0.33. The Ibiza (6K) was built entirely under the direction of the VW Group , many features took over Volkswagen for the Polo 6N released a year later . Initially, this first "VW Seat" was seen as a cheap alternative to VW, but the introduction of the Cupra models and the successes in the rally sector gave Seat a sporting reputation.This shared platform and some interior elements - such as the full dashboard - with the Volkswagen Polo III together with mechanical solutions from higher models of the VAG group not present on the Polo . It also had two redesigns: a lighter one in which new bumpers, front and changes in the range were included ( 1996 ); and a deeper redesign in 1999, which changed many components of the exterior and interior, coming to be considered by many as a third edition given the large number of changes. This series advanced the future aesthetics of all the SEATs onwards. This reestilización did not share stamps or interiors with any model of Volkswagen .

The Ibiza II made known to the brand in foreign markets as a producer of one of the young and fast cars (first GTi versions and above all the 110 hp TDI) with high quality construction. In foreign markets the buyer saw in the Ibiza II a Volkswagen Polo with more equipment and engine for the same price, while in the Spanish domestic market the car completely eclipsed the sales of his cousin.

Thus the Ibiza II innovated, anticipating the market trend of the later generation with mechanical equipment and sophistication reserved at the time to cars of the C segment , such as engines up to 2.0 liters, 16 valves in gasoline, 110 hp diesel and possibility or even compatibility of options impossible in other brands (for example, the Polo could not simultaneously mount diesel engine with air conditioning and power steering). From this generation the Ibiza had 3 derivatives: the SEAT Córdoba ; which was in sedan version, the Córdoba Vario; that it was the station wagon version and the SEAT Inca ; that was the van version.The Ibiza 6K was sold in South Africa as VW Polo Playa (with VW logo in the radiator grille).

The advantage of the modified engine mount and other engine design ( VW-EA827 engine block) was that the Seat Ibiza compared to the Polo 6N had much less gear damage. The gearboxes VW 020 and VW 02A were used, which were significantly more stable than the gearboxes of the type 085 in the Polo 6N.

In August 1999, the Ibiza II was subjected to a facelift .changes:

In February 2002, the production of Ibiza II was completed and the Ibiza III (Type 6L) introduced as a successor.

The most performance model of the range, baptized as Cupra, did not arrive until 1997, with a 2.0-liter 16-valve engine that produced an important figure of 150 HP. "They lowered" the power in this model because in 1998 Volkswagen would take the Golf III VR6 and for marketing reasons this Cupra 2.0 16v ABF released 150 HP and not 160 HP as they had thought.

Later SEAT would manufacture the Cupra 2, which would be the same but with small changes such as red seat belts or mixed leather seats with Cupra embroidery. However, for the renewed model of 1999, the Cupra version had a new turbocharged mechanics of 1.8 liters and 20 valves, which reached 156 HP. Of this last model existed an improved version, denominated Cupra R, that mounted the same engine boosted until 180 CV, and of which only 200 units were made, 25 of them for Spain.

Prototypes: In 1993 the electric prototype of the Ibiza appeared , which incorporated an electric motor of 23 KW, and that reached a maximum speed of 95 km / h. 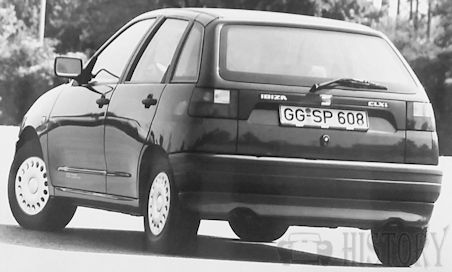