The Seat Mii is a small size microcar from Seat . This is a variant of the New Small Family in the VW Group. The vehicle appeared on the Spanish market at the end of 2011 . It has been available throughout Europe since April 2012.The model was initially available only with the 3-door body code (KF12) but later the 5-door code version (KF13) was added to the range.

The Mii is 3.55 meters long and should offer space for four passengers . Since May 2012, a five-door version is available until 2018, there was the Mii as a three-door. This option does not apply from model year 2019; the sister models VW up! and Škoda Citigo will continue to be available as three-door cars. The trunk offers 251 liters of space; it can be increased by folding the rear seat to 951 liters. The safety equipment includes four airbags as standard. Brake Assist (option) measures by a laser - sensor other vehicles moving in the direction of travel. If the driver drives less than 30 km / h, the system warns the driver and if this does not react, the Mii brakes independently.

Apart from the design, the vehicle is almost identical to the Škoda Citigo and the VW up! , Seat offers, like Škoda Auto and Volkswagen, three engine versions with a 1.0-liter engine of 44 or 55 kW and a version with gas engine and 50 kW. Later, more engines will follow as well as a vehicle with electric drive . The base of the Mii is the VW up !. All three vehicles are in the Slovak plant Bratislava manufactured in parallel.

Seat offers (as with many other models) three trim levels: Mii (base), Reference and Style. In the highest equipment line (Style), the car has, among other things, electric windows and central locking including radio remote control.

The SEAT Mii conducted the EuroNCAP crash tests in 2011, and achieved a total rating of 5 stars

At the Mobile World Congress in February 2017 in Barcelona , Seat presented the eMii prototype of its first electric car. The eMii is based on the VW e-up! , First, a small series of ten vehicles was built for a car sharing project.The SEAT Mii was officially presented in the month of October 2011. It is manufactured in Bratislava , together with its similar Volkswagen up! and the Škoda Citigo . 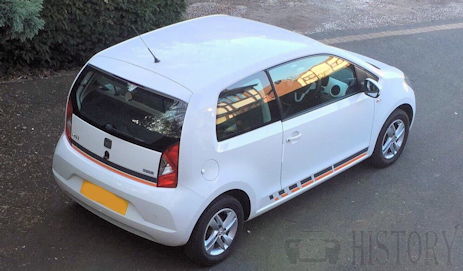