The Seat Arosa (model 6H) is a small car from Seat and almost identical to the VW Lupo between 1997 and 2004 . This appeared already in May 1997, one year before the Lupo. Initially, it was offered with a 1.0-liter gasoline engine with 37 kW (50 hp) or a 1.4-liter gasoline engine with 44 kW (60 hp). The 1.4-liter engine was initially only with automatic transmission. Later, a 1.7-liter naturally aspirated diesel engine, a 1.4-liter turbo diesel engine and an uprated 16-valve gasoline engine with 74 kW (101 hp) were added.The SEAT Arosa  Its name refers to Villagarcía de Arosa , a municipality in the province of Pontevedra ( Galicia , Spain ). It is a four-seater with three-door hatchback body , front engine and front-wheel drive. The SEAT Arosa is the successor of the SEAT Marbella and the predecessor of the SEAT Mii , launched at the end of 2011.

SEAT at the beginning of the 90s once structured its new range already forming part of the VW Group , plans to launch a new vehicle to replace the SEAT Marbella , older model at the time within its range. The first projects with sketches and models began to be realized, since it was not clear at all if giving a somewhat different appearance to the new model was looking for something more modern and elaborated than its predecessor, within this new project the possibility was given in 1991 of be a shared development between SEAT , Volkswagen and Ford. In 1992 the project would join Suzuki but with the model almost ready it would end up being suspended, after multiple ideas for the development of the model would only be the two brands of the VW Group , SEAT and Volkswagenwilling to develop the model, its official presentation is made with the name SEAT Arosa and would be seen for the first time at the Geneva Motor Show , in March 1997, it was designed by Jozef Kabaň , who would later design the Bugatti Veyron . The Arosa used a new platform the A00 of the Volkswagen Group that was derived from the A03 used by the SEAT Ibiza of second generation and Volkswagen Polo of third generation , since it is modified to be smaller according to the model, in addition to the following year in 1998 the new Volkswagen model named Volkswagen Lupo would appear, and that was based on the Arosa sharing many aspects of design.

Initially the production was carried out at the Volkswagen plant in Wolfsburg, Germany but shortly after the manufacture of the Arosa would be transferred to the factory of the SEAT facilities in Martorell, Spain.

In the year 2000 the SEAT Arosa underwent a redesign, it would be presented at the Paris Motor Show at the end of the year. The new Arosa (model 6H1), known as Arosa II, although it is still the same models with a more modern aesthetic, its calender happened to have three air intakes and its headlights similar to those of the third generation of the SEAT Ibiza , the rear lights became lexus and depending on the version could have pink or black background.The Arosa is characterized by its small exterior dimensions in a relatively large interior. It has 4 seats with a small trunk, the rear seat can also be folded.

In June 2004, the production of the Seat Arosa was discontinued. 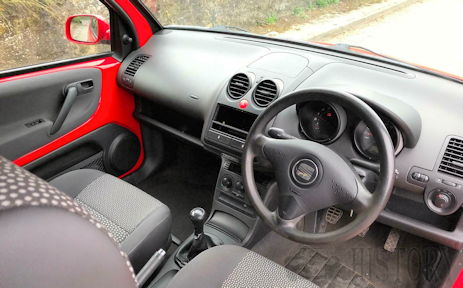 In the first phase

In the second phase

VSS is the name for Seat, Z are filler characters, 6H means Arosa, WXY-1 is the respective designation of the year of construction, W and R stand for the production sites Wolfsburg (W) and Martorell (R), the remaining digits are the serial number. The model years are not identical to the calendar years. Usually one speaks z. For example, in model year 2000, from a period from autumn 1999 to summer 2000.

It had an approved consumption of 3.0 L / 100 km; to reach this mark, the engine was turned off when the gear was stopped, the aerodynamics were improved and the tires were of low resistance. 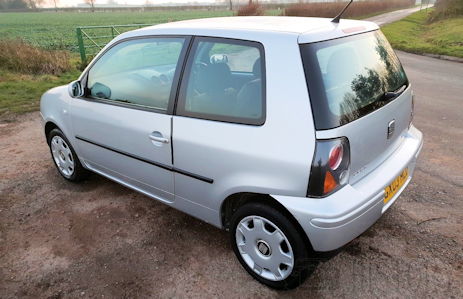