The Seat Malaga (in Greece Seat Gredos ) is a four-door notchback sedan . It was launched in May 1985 as the successor of the Seat 131 and the Seat Ronda . There are also technical and visual similarities with the Italian competitor Fiat Regata .In May 1991, the Malaga was replaced by Toledo on VW basis.

The SEAT Málaga (model A023) appeared at the time of transition in which SEAT ended its relations with Fiat and before its takeover by the Volkswagen Group , being together with the Ibiza I the first SEAT without a Fiat counterpart from the SEAT 133 and SEAT 1200 Sport in the 1970s .

It is the result of the so-called "collaboration agreement" with Fiat by which it withdrew from the shareholding of SEAT in exchange for allowing SEAT to develop models derived from the Fiat 127 , Fiat Ritmo and Fiat 131 until 1986. Hence the use of a pre-existing platform , of the Fiat Ritmo (itself derived from the previous Fiat 128 , first foray Fiat in front - wheel drive segment under its trademark, after the experience gained through the Autobianchi ).

SEAT that had manufactured its own version of the Fiat Ritmo adapting the engines of the Fiat 124 , was forced by the collaboration agreement to modify the model with the lowest possible cost in "significant aspects of external panelería", as the agreement for the be able to market it as SEAT Ronda . Despite this SEAT was sued before the Court of Arbitration of Paris by the Fiat group , which considered these changes insignificant, resulting in SEAT finally authorized to commercialize the Ronda model throughout the world.

Once the road to foreign markets with the Ronda was opened, the same base would be used under the S2 project for the development of the new sedan called SEAT Málaga. At first it was proposed to develop a family variant that would have been the Malaga Panorama, but it would be discarded, only the sedan would be developed.

This new design sought to get as far away as possible from the Fiat Ritmo , despite sharing a large part of the paneling (doors, roof, etc.) with the SEAT Round and with the new Italian Ritmo and Fiat Regatta .

From the use of this platform derive some characteristics typical of Malaga, such as the rear suspension by transverse ballestón , typical implementation of Fiat since the times of the Fiat 500 and Fiat 600 or visibly the doors of the Fiat Ritmo , with other handles of autochthonous design.

At least in the design, the car made a relatively good impression in 1985. For the interior the inspiration was clearly Lancia as it had already been in the Ronda and for the exterior a brand image was sought, with a design similar to the new Ibiza model that took its design from another discarded by Volkswagen for its Golf II. The exterior design was made by Giorgetto Giugiaro ( Italdesign ), the bodybuilder was Karmann and Astesa was in charge of the interior. At the time, its main competitors were the Renault 9 and the Volkswagen Jetta .

In 1987 he underwent a small redesign that affected the front calender, leaving his checkered grill for another in horizontal lines. However, over time, as its origin of Fiat Ritmo is becoming increasingly distant and due to the advances of the competition the car began to be outdated compared to the best cars of international competition: Opel Kadett , Volkswagen Jetta and Fiat Regata .

With the Regatta it shared a frame, but Fiat continued to develop it with a deep reestilization, greater equipment and a higher quality of construction, as well as much more competitive mechanics, etc. Although the SEAT Málaga remained well competing in low prices with other models of distant origin such as the Ford Escort Mk III / Orion, etc.

Due to this, in 1989, in order to make the model last a little longer until a successor arrives, it will be decided that Malaga will undergo a resurfacing. This consisted in a change in the lower part of the bumpers, different side moldings, the calender was painted in body color with a hole to house the new SEAT brand logo, and some small touches in the interior.SEAT presented to the Volskwagen dome in 1984, on the extended platform of the Ibiza, a prototype called SEAT Mallorca that could have replaced Málaga at the end of 1989, but was rejected by the group (not to confuse the SEAT Mallorca prototype with the Hispano derivative German Mallorca that was built from numerous components of SEAT origin). In its place Volkswagen offers SEAT to resume an aborted project to replace the Passat and Santana, and to be a substitute for the SEAT Málaga, but SEAT rejects it as a car with enormous dimensions and, instead of this, SEAT decides to start from zero with a new vehicle.

SEAT reached an agreement in 1986 to create a new sedan in cooperation with the Volkswagen group. This would be ready in 1991 under the name of SEAT Toledo . However, the Toledo would not be his direct successor since the new model was added to be between segments C and D, although it would really belong to the C per platform. The production of the SEAT Málaga would end in 1991 but the commercialization of units would end in 1992.

In 1993 would come another new model based on the second generation Ibiza in sedan version called SEAT Córdoba , this belonging to segment B, which is considered that the Malaga has 2 indirect substitutes as it would be between the Toledo and Cordoba models.

Although they belonged to different segments, the first-generation SEAT Ibiza shared a platform with Málaga. The Ibiza was subcompact segment B that unlike all its rivals used a platform of the upper segment from the Fiat Ritmo , optimizing the scarce resources available to rule out a matter of costs to create a new or take advantage of the obsolete 127 / Fura .The interiors were also different except for some controls (such as the famous "satellites" on the steering wheel), and the new exterior design allowed them to survive Malaga and even live with the Toledo I , a model already developed in cooperation with the Volkswagen Group.

In the section of engines, SEAT invested in the partial remotorización of the original resorting to Porsche, and from there derive the famous System Porsche , engines adapted to their time and that even today receive few negative reviews apart from be little savers Initially they were available with displacements 1.2 of 63 CV, 1.5 of 85 CV and 1.5 of injection of 100 CV, this last one appeared with the version Malaga Injection. There was also an exclusive version, powered by the Malaga GLX since 1989, in which its System Porsche 1.5 engine went from 85 to 90 horsepower.

The two petrol engines came from the Ronda, the diesel was purchased from Fiat.

This remotorización did not arrive at the diesel, where it continued using the Fiat 1.714 engine of 55 CV from the Fiat Ritmo in spite of having considered equipping with other engines supplied by the Italian FNM or by the own Fiat , motorizing the Ronda / Malaga with diesel engines based on gasoline engines. In fact, the brothers Negri, of FNM, had arrived months ago to an agreement of principle to supply to SEAT 200 daily units of its compact diesel engine of 1,366 cc (76 x 71.5 mm), that offered diverse possibilities, because it gave 48 CV in atmospheric version, 60 HP as Turbo, and 66 HP when an intercooler is added to the turbocharger to cool the intake air.

For foreign markets, given that the brand had to be known in Europe (where it had not been able to export more than versions marketed with the Fiat logo), the strategy was used to present the vehicle as "Italian style, German technology and Spanish inspiration" "in reference to Giugiaro and Porsche , who had to help the brand in some way. Low prices, size of the trunk and a relatively nice and well equipped interior design were his only arguments in the market. By against the finishes and the quality, authentic heel of Achilles of the SEAT of transition were inferior to practically all their rivals, gradually improving especially after the takeover by Volkswagen

The Malaga exported to Greece was known as SEAT Gredos ,Malaga sales were relatively good in Spain , but very low in foreign markets, despite having a System Porsche engine like the SEAT Ibiza .

Versions : The finishes were three:

Versions and special editions of the SEAT Málaga:

Versions of the SEAT Málaga outside of Spain. 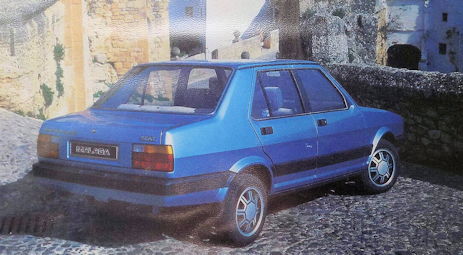