Seat Ibiza is the commercial name of various car brands of the car brand Seat , which are manufactured since mid-1984. The name is borrowed from the Balearic island of Ibiza , the bodies of the car had previously always hatchback .

Launched in July 1984 the first Ibiza was a proprietary development of Seat on the platform of Seat Ronda  . The body of the Ibiza comes from Giorgetto Giugiaro , who also designed the VW Golf , the Fiat Uno and many other vehicles. The engines with a displacement of 1.2 l or more were developed with the exception of the 1.7 l diesel engine from Porsche. These were engines of type EA801 VW, whose capacity increased to 1.5 l and (partially) were equipped with L-Jetronic . The other engines are from Fiat.

The first model of the Seat Ibiza was available in the following equipment variants:

Some vehicles were equipped with air conditioning. Furthermore, in a few countries, for example in Austria and Switzerland, a model with 1.5-l turbo engine with catalytic converter and 80 kW (109 hp) sold.

In the last quarter of the year 1986, the introduction of the five-door version arrived, as at first it started selling only on three doors. The Ibiza was slightly redesigned in the middle of its commercial life, being in the autumn of 1988 its official presentation to the media and the general public, updating the range and calling it commercially as SEAT Ibiza II ( not to be confused with the second generation), slightly renewing its appearance; in particular, the most remarkable change with this small renovation was the new dashboard, already with levers (with provenance VW) and eliminating the famous and original satellites of the first generation, the new calender in color of the body similar to that of the SXI finish , but with certain modifications to house the new logo, and new interior trim and trim.

Already in 1991, when SEAT was already part of the Volkswagen Group , it underwent a more profound redesign which was called SEAT Ibiza New Style or New Look in other countries.

Its design was the work of Giorgetto Giugiaro , who took advantage of a project designed by himself for the second generation of the Volkswagen Golf, but which was rejected by Volkswagen. SEAT continued with its development, known at the beginning as S1 project . This supposed a saving in development that, given the bad economic situation of the company in that moment, was very important. German companies Karmann (in the industrialization of the body and its development) and Porsche (in the development of new engines for the brand) also collaborated  The car sold well in Spain and abroad, for its habitability and low price, but penalized by its low quality finish.

Versions were initially three, until the appearance of the SXI in January 1988, in addition to having different versions. The range of serious finishes the following:

Special versions of the '84 range

In the 1988 Paris Salon, a small Ibiza redesign was presented, which was marketed before the end of the year. The finishes in this update of the model suffer few changes, disappearing the L / LD and replacing the new XL finish . The other finishes are maintained: GL / GLD , GLX and SXI .

The special editions with the redesign are launched with new logos and small changes, such as the Ibiza "Del Sol" and the Ibiza Crono, as well as new versions:

In March of 1991 , already with SEAT under control of the Volkswagen Group , another small remodeling took place in the Ibiza. It was presented at the Barcelona Motor Show, and was called Ibiza New Style , being produced until 1993, the year in which the Ibiza MK2 (second generation) was presented.

The main changes were abroad and in its mechanics; the most important change was the new front, more rounded and aerodynamic, with new bumpers and lower spoiler . The steering was also improved, to get a better drive smoothness, but it was still hard and heavy to handle, especially in the city. What did improve considerably was the soundproofing.

The difference between both versions was the equipment and the logos that characterized the models; the "Sport Line" placed a total of 6 vinyl logos on the outside with the word Sport in gray and the word line in yellow, which were placed on the front doors of the larger ones, which were accompanied by a lateral line of the same color gray of the word Sport, followed by a tiny sport line logo on the doorpost, on the back of the gate one medium and one small on the front grille. While the interior located 3 logos located the first relief on the wheel and the other embroidery on the headboards of the front seats. The "Sport" only had logos on the doors and on the steering wheel and also both versions had different upholsteries. This version would be shared the following year with the SEAT Toledo that had the same upholstery of the Sport line, although the difference was that the Toledo was named Sport and Sport 2000.

Versions in other markets (the whole range)

There was also a series of preparations that mounted body kits such as DSD, Vestatec, Europarts , and even an original one called Ibiza Media System .

In Germany there was the Ibiza Cabrio, but it was a preparation requested by order that was made by the firm Bieber Cabrio Borken .

The Emelba 7 was a mono - volume version of the SEAT Ibiza, designed by the bodywork company Emelba . Originally, this project had been called «LB». It was presented in 1985 at the Expoocio Hall . He used the platform of the elongated Ibiza 30 cm. The rear ballestón was reinforced. He also used his engines, one diesel and one gasoline . Interestingly, the gasolineengine was more efficient and economical than diesel, consumed less, cost less, had more horsesand allowed it to reach 160 kms / hour. The rear seats were removable and foldable to give them the proper configuration. The front seats were rotating. To lighten weights, the body was fiber and shared some exterior component with the Ibiza, such as headlights, grille, etc. Some standard features were: monochrome or bicolour metallic paint, front headrests, rear wiper, halogen headlights, five speeds, tinted windows, pre - installation of radio and front air conditioning.

Emelba designed a pick-up version of the Ibiza, this being one of his last projects. Only one prototype was made, which was presented in 1986 . The back part was made of fiberglass to avoid oxidation, shock and easy cleaning. It also had metal bars. The rear suspension was reinforced to hold more weight than the SEAT Ibiza. He had as option a canvas awning to cover the back. The mechanics and options were the same as those of the normal Ibiza.

At the end of its European life, the plant in the Barcelona Free Trade Zone was dismantled and the assembly machinery together with the corresponding license of the first generation of the Ibiza was acquired by the Nanjing Automobile Corporation and the Malasian Lyon Group in 1999, and It would begin to mount in Iran and later in China , with small updates and modifications with the name of NJ6400GHR or Nanjing Yuejin Eagle . In 2003 there was a small redesign, renaming the model marketed as NJ7150 or Nanjing Yuejin Soyat, and in 2007 I would suffer a second restyling something deeper. Exclusively, Najining would also develop a van variant body called Nanjing Unique , which its box had certain features of the SEAT Inca but with the body of the Ibiza I instead of the Ibiza II.

Initially had three different engines: three petrol of 1.2 and 1.5 liters of 63 and 85 and 90 HP (double Weber carburetor )respectively (the famous "System Porsche" engines) and a diesel of 1.7 liters and 55 HP that came from the Fiat Rhythm . In 1988 it included a 1.5-liter engine with 100 hp (its commercial name being "Ibiza SXI") and an economic engine of 903 cc and 44 hp also of Fiat origin . At the end of its commercial life a 1.7 of 105 CV System Porsche was offered , designed to compensate for the loss of power that the use of a catalyst would imply. 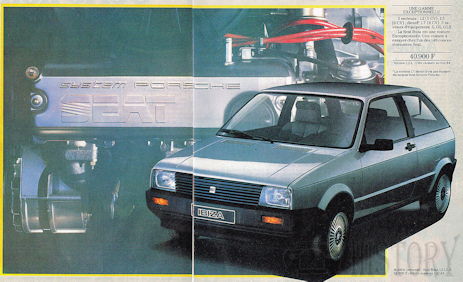