The Seat Ronda of the Spanish car manufacturer Seat is a five-door compact saloon compact class, which was built in mid-1982 with a modified design and revised engines as the successor to the Seat Ritmo .The stylistic revisions were made by Rayton Fissore and Tom Tjaarda

In spring 1985 appeared on the Ronda P-based notchback Malaga .End of 1986, the production of the Seat Ronda P was discontinued. The Malaga took over the position of the Ronda, which there was no compact hatchback from Seat in the program. Only in the fall of 1999, a vehicle with these specifications was added to the model range with the Seat Leon , which was based on the VW Golf .

Already in the fall of 1984 , Seat of Porsche had a new engine palette system Porsche and gear construct. In addition, the new engines had an electronic ignition and carburetor. The diesel engine remained unchanged. Therefore, the new models also contributed the P (for Porsche) 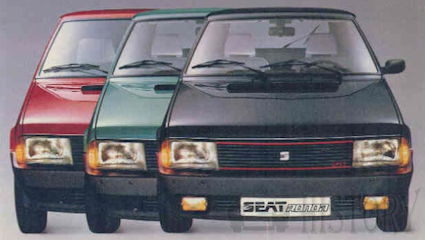