The Seat Marbella is a three-door car based on the Fiat Panda from the fall of 1985.

With the separation of Fiat and the acquisition by VW . The technical revision of the Fiat Panda in early 1986, which mainly concerned the suspension, and the introduction of the new Fire engines was not taken over with the Marbella. Compared to the second generation Fiat Panda, the standard Marbella were a little inferior. The two transverse transversely mounted 4-cylinder engines (843 cc / 34 hp / 25 kW and 903 cc / 40 hp / 29 kW) were initially adopted from the predecessor model. One year after the start of production, the smaller engine was eliminated, but there was also the 903 cc engine with 42 hp / 31 kW. Later, its power still increased to 45 hp / 34 kW. From December 1986 came because of the great demand, the 34 hp engine back into the program.

Since 1985, there was the Seat Trans on extended Panda basis. It was available as a two-seat van with a high roof or as a three-door van with a removable rear seat. With the model change from Panda to Marbella, the Trans became a Seat Terra . In addition to the well-known 903 cc engine, two four-cylinder diesel engines from VW were also offered, which scooped 45 hp / 33 kW from 1,272 cc or 48 hp / 35 kW from 1,398 cc. The vehicles were thus 120-125 km / h.

In 1988, Kamei presented the Terra Multicar concept vehicle based on the Terra with various Variotop detachable rear superstructures. 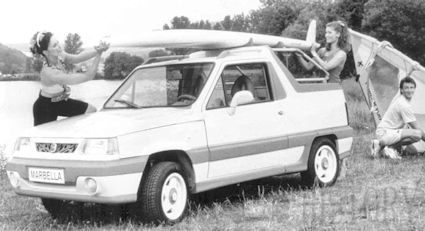 In 1991, the prototype Seat Marbella Playa was presented as a recreational vehicle between pick-up and convertible. He was equipped with a roof rail for the transport of surfboards and a detachable Targa roof over the front seats. The front view had been modernized. If more than one passenger should be taken, folding stools could be folded out on the sides of the loading area. This model was not produced in series. Instead, there was later a Playa, which was an ordinary Marbella with a fabric sunroof.

The Marbella was discontinued in late 1998, the Terra already in 1995. By the end of production, 591,151 copies of Marbella and Terra had been produced. Successor of the Marbella was the Seat Arosa , while the Terra was replaced by the Seat Inca . 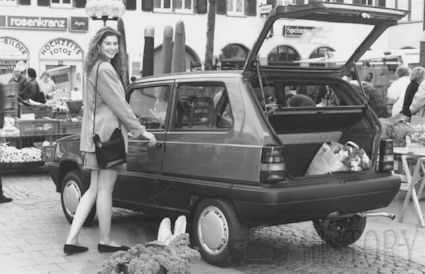