It was built in Spain with the body of the Fiat 131 , but of the Italian original deviating engine:

In early 1985, the production of the Seat 131 was completed. His successor was called Malaga .

Presented at the Barcelona Motor Show in 1975  , the SEAT 131 was immediately accepted as an elegant, reliable and very modern car compared to the SEAT 1430 it replaces. Unlike the Fiat , for which a whole range of mechanics had been developed based on the engines of the Fiat 124 and which divided the range between the Mirafiori, with low-consumption single-shaft engines-from 1297, 1301, 1357 and 1585 cc and Supermirafiori with bi-shaft engines up to 1,995 cc, the SEAT 131 exclusively used motors and transmissions of Fiat 124 -S, and Fiat 132 origin , never using the original Italian version except in the units destined for export, always under Fiat brand .

Instead the range started with the 1438 cc, already out of production in Italy, and had mounted among others the Fiat 124 Special, Autobianchi A111 and SEAT 1430 , having as an upper step the Fiat 132 of 1.592 cc of origin and a maximum power of 95 HP (DIN) that had also been used in the SEAT 1430 range and that is no longer available in the 132 of SEAT from 1976. Later, the offer would be completed with the 132th shaft in its higher displacements ; the 1800 of 107 CV in the first series, the 1919 cc and 114 CV developed by the Technical Center of Martorell , with the reduced cylinder capacity for fiscal reasons for the second, and finally the original variant Fiat 1995 cc in the third series.

The first catalog Diesel, does not appear until September 1978, with the Perkins Diesel. In its context, this first 131 Diesel was a factory alternative to the frequent gasoline vehicle transformation kits for professionals who used 131 as well as Perkins , Barreiros , Mercedes-Benz or SAVA engines . SEAT until then offered its factory Diesel only in the "Big Seat", first the 1500 and then the 132, and chose to stagger its range offering only this diesel variant of lower power in the 131 until the disappearance of 132, passing then to use the 2500 D road that used the Sofim engine 8140.61 (which Fiat had long been offering in variants of 2000 and 2500 cc.).

It was replaced at the bottom by vehicles derived from the Fiat saga of front-wheel drive started with Fiat 128 ; the Fiat Regata and the SEAT Málaga , three-volume vehicles with similar habitability and lower consumption of the new C segment that was emerging in southern Europe as an alternative to the economic saloons of the early 80's, a role that the Fiat Regatta naturally covered in other markets.

In 1977 the first series received slight changes of equipment consisting of Italian Supermirariori seats with velvet upholstery and matching door panels for the L and E, along with a new range of colors, carpeting in the boot, warning, indicator light of the handbrake, roller belts and in the family versions, external rear-view mirrors as standard.

- Externally mounts the chrome grille of two rectangular headlights, windshield frames and rear window without chrome trim and chrome wipers, without chrome trim on the door frames or rear license plate frame, it also does not have side moldings of the body, protections of rubber bumpers only on the sides and 4.5-inch wheels with fifteen circular holes and chrome trim, equipped with radial tires of metal structure 155SR-13.

- Externally differentiated by its circular double dome with conventional lamps integrated in the grille, tires of the same size with 160SR-13 tires and specific design with black hub caps, chrome moldings on the door frames moldings, chrome rim on windshield and moon rear, wiper arms in black anti-glare, rubber profiles in the central area of ​​both bumpers, and frame also chromed in the base of the rear license plate.

Corresponds to the second series of the Fiat 131, although simplified in only two levels of finish; the basic Mirafiori L (L in relatives) and the superior Supermirafiori (CL in relatives).

In the Supermirafiori and 5 new doors CL single-arm steering wheel and dashboard (which nevertheless retains the previous control panel slightly modified) reformed air conditioning system including air vents to the feet and the front windows through bellows in the doors, lighting the ideograms in the fiber optic switches, new seats with rear headrests and central armrest, and new modern door panels and upholstery to match the seats. The Mirafiori L and 5 L doors meanwhile fully maintain the interior of the previous series with detailed modifications. Much of the production is destined for export as Fiat 131 Supermirafiori, incorporating in these units the original propellers of the Italian model, directly brought from their country of origin.

The four circular headlights will only be used in the Super Diesel variant, while the newly designed rectangular ones will equip both the Mirafiori L and the Supermirafiori. There are also unpublished so far back pilots of large size. The bumpers are in metal with rubber corners in Mirafiori L, or resin in Supermirafiori and Super Diesel, adapting to the trends of the eighties. The limited edition CLX 2000 mounts the side moldings of the old CLX 1800 and all the chrome, grille, and resin bumpers painted in matte black.

The rims were redesigned, disappearing the hubcaps, also in the fashion of the early eighties, assembling in their place hubs in the basic versions and steel wheels with dimensions of 5 x 13 inches, with a design in the shape of a four leaf clover bicolor, in the Supermirafiori. The CLX 2000 will mount a light alloy Cromodora wheels of Italian origin in 5.5 "x 13, initially shod with a Michelin ZX of 185 / 70SR13, and in the last units with some much more appropriate to the characteristics of the Michelin XVS 175 model / 70HR13, as well as suspensions with a special adjustment, and exhaust system with greater relief.

Change corresponding to the third series of the Fiat 131, appears in 1981 with the classic anagram of SEAT although it comes to incorporate the new logo unlinked from Fiat designed by Landor Associatesat the end of his commercial life. The interior finishes are unified, counting all the models with the interior of the Supermirafiori of the previous series updated with the two-armed steering wheel from the old Fiat 131 Racing, a new single glove box without sliding cover, new colors and details of presentation. The equipment finally includes electric windows and central locking together with power steering, or air conditioning, elements already available in the previous series. The family body is now called Panorama with Mirafiori CL equipment or Super Panorama with Supermirafiori equipment.They have new integral bumpers in deformable plastic material in the Diplomatic / Supermirafiori / Panorama Super or metal with extended rubber corners until the wheel arches in the Mirafiori CL / Panorama. Protection moldings are added to the doors, which in the Diplomatic / Supermirafiori / Super Panorama are integral in continuation of the bumper line. The front optical groups also keep reserving the circular for the more expensive versions 2500 D and Diplomatic, while the rear change completely becoming more prominent and narrow including license plate and recoil lights and now leaving sheet metal on its bottom where it place the anagrams. The original tires of the previous series are kept in the Mirafiori CL with black hubcaps,

The characteristic bulge of the bonnet in the Diesel 2500, initially is the same as in the previous series, going to occupy a larger surface in the last units, which also go to assemble the gearbox equipped with the five-speed versions of gasoline (with delayed vertical lever of origin 132), instead of the ZF provided for these mechanics by the parent company Fiat (horizontal lever forward), more reinforced to withstand the high torque of these engines, and that had been used until the moment.

After the break with Fiat and to ensure the continuity of the SEAT, both brands signed the ' collaboration agreement' by the SEAT could continue to temporarily market models derived from the Fiat Panda , Fiat 127 , Fiat Ritmo and Fiat 131 , provided they differ in "significant aspects of external panelería", that is, only if they were subjected to a costly re-sling that did not allow them to be identified with the Fiat originals. However, since the Fiat 131 was at the end of its commercial life in Europe , SEAT did not develop any derivative, being indirectly replaced by the Seat Málaga , derived from the Fiat Rhythm . 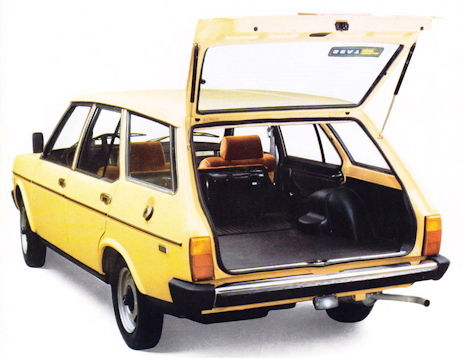