The second generation León, Typ 1P, was released in 2005, with factory production commencing May 2005. It is based on the Volkswagen Group A5 (PQ35) platform, most notably used by the Volkswagen Golf Mk5. It is built in Spain, and has a sharper exterior look with vertically parked windscreen wipers, and the external rear door handles more integrated, in a similar style to that seen on recent Alfa Romeo models. Design was handled by Walter de'Silva, and the car uses the same design style that started with the SEAT Altea.

The base model on offer is the new 16 valve 1.2 litre TSI petrol engine with 77 kilowatts (105 PS; 103 bhp). In some markets (e.g. Greece and Italy), the León is available with a 1.4 litre MPI engine producing 63 kilowatts (86 PS; 84 bhp). The sportier variants begin with the 110 kilowatts (150 PS; 148 bhp) 2.0 litre Fuel Stratified Injection (FSI) and the popular 103 kilowatts (140 PS; 138 bhp) 2.0 litre Turbocharged Direct Injection (TDI) diesel engine. Both are fitted with a standard six-speed manual transmission, with the six-speed or seven-speed Direct-Shift Gearbox (DSG) available as an option. A 136 kilowatts (185 PS; 182 bhp) variant of the 2.0 TFSI unique to the León was later introduced, but despite a low list price and rapid performance – attracted only minimal attention and average reviews, so this was later discontinued to make way for the sportier FR variants. 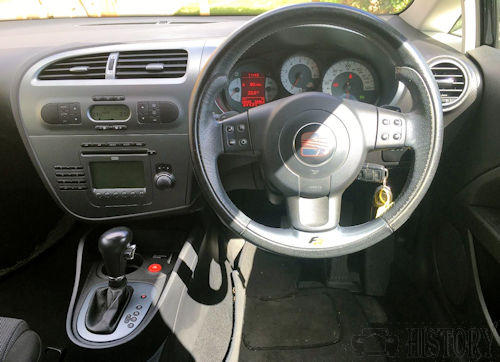 The first real sporty León within the new range is the León FR with twin-exhaust pipes to left rear, sport seats and gear stick with FR logo to distinguish it from lesser models, was introduced in June 2006, when it finally received the 147 kilowatts (200 PS; 197 bhp) 2.0 TFSI engine from the Volkswagen Golf Mk5 GTI, as well as a 125 kilowatts (170 PS; 168 bhp) variant of the 2.0 TDI unit featured in the Golf and Audi A3. Further standard equipment includes climate control air conditioning.

Next in the range is the 2.0 TFSI Cupra model. It features a 177 kilowatts (241 PS; 237 bhp) engine, and a 0-100 kilometres per hour (62.1 mph) time of 6.4 seconds. The Cupra comes with standard 18" 5 twin-spoke alloys, red brake calipers, and the standard Cupra oval exhaust, as well as new, unique paint finishes and bolstered sport seats complete with the Cupra logo. Also standard are drilled-aluminium sports pedals.

From 2008, the K1 variant of the León Cupra was introduced in the UK, featuring extensively re-worked front and rear bumpers, side skirts, a more pronounced tailgate spoiler. It also gained a unique chrome-tipped, centrally-mounted, oval exhaust. The K1 is considered to be a limited edition model, as production was only for the year 2008–2009 and it only being available in the UK.

In 2009, the SEAT León Cupra was turned into a race car in the 'SEAT Cupra race' mobile game for Apple iPhone/iPod touch available through the iTunes' App store. 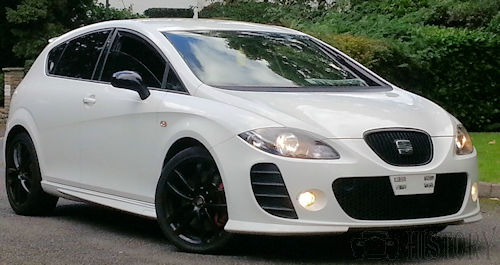 In 2008, SEAT Deutschland announced the production of 55 units of the SEAT León Copa Edition. This limited edition is powered with 2.0 TFSI engine improved to 210 kilowatts (286 PS; 282 bhp) of maximum power, and 360 newton metres (266 lbf·ft). Maximum speed is 255 kilometres per hour (158.4 mph) and 0-100 km/h (62.1 mph) time is 5.9 seconds. The suspension is an Eibach derived from the León Supercopa, and the brakes have been improved to cope with the enhanced performance from the uprated engine. In addition, the car includes xenon HID headlights, 18 inch wheels and a spoiler with larger air intakes. The car colour is white with black stripes.

SEAT México announced the production of 100 units of the Copa Edition in orange colour with black stripes in September 2008. The Mexican version has a sunroof, whilst the European León Copa does not.

At the 2008 Geneva Auto Show, the León Streetcopa limited edition was released. It was a similar edition of León Copa Edition with some changes, designed for the Swiss market and limited to 200 units.Lately, after SEAT won World Touring Car Championship, SEAT Schweiz released a facelifted version called León World Champion Edition, also limited to 200 units.

It comes only in Candy white or Infiri black. The Cupra 310 Limited Edition features beside the OEM Cupra equipment an engine management remapping by Abt Sportsline, black Orion-alloy wheels, an alarm system, bluetooth connectivity and special 310 Limited Edition badges on the sides and the rear hatch. There are also stainless decals inside the front door frames displaying the 310 Ltd logo. A badge on the dashboard displays the serial number, and the car is delivered with a key ring to match. Full factory warranty is retained with the power increase that makes this car 259 kilometres per hour (160.9 mph) fast.

In 2007, SEAT prepared a sole car customized by Shakira. This car was auctioned, and the benefits went to the charity through Pies Descalzos Foundation. Mechanically, it is the same car as the León Cupra.

SEAT has produced two versions of the Twin Drive prototype. Initially announced in May 2009 as a diesel/battery hybrid, the León Twin Drive Ecomotive is a series plug-in hybrid, powered by an electric motor, through lithium-ion batteries chargeable at a regular electrical socket, in combination with a diesel-powered internal combustion engine. The Twin Drive Ecomotive project is a first step towards a 100% electric car and is planned to go for production in 2014.

The Twin Drive Ecomotive as a plug-in hybrid vehicle powered through the combination of both a diesel engine and an electric motor. The vehicle's electric motor has an output of 35 KW and a self-imposed top speed of 100 km/h, and resumes power from Li-ion batteries placed at the rear of the vehicle, giving it a range of about 50 km for short urban circuits, while for longer trips the environmentally friendly tuned combustion engine is used. Quick battery recharging process from the mains through regular power sockets features. 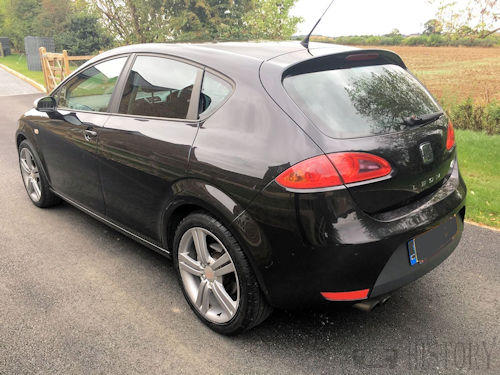